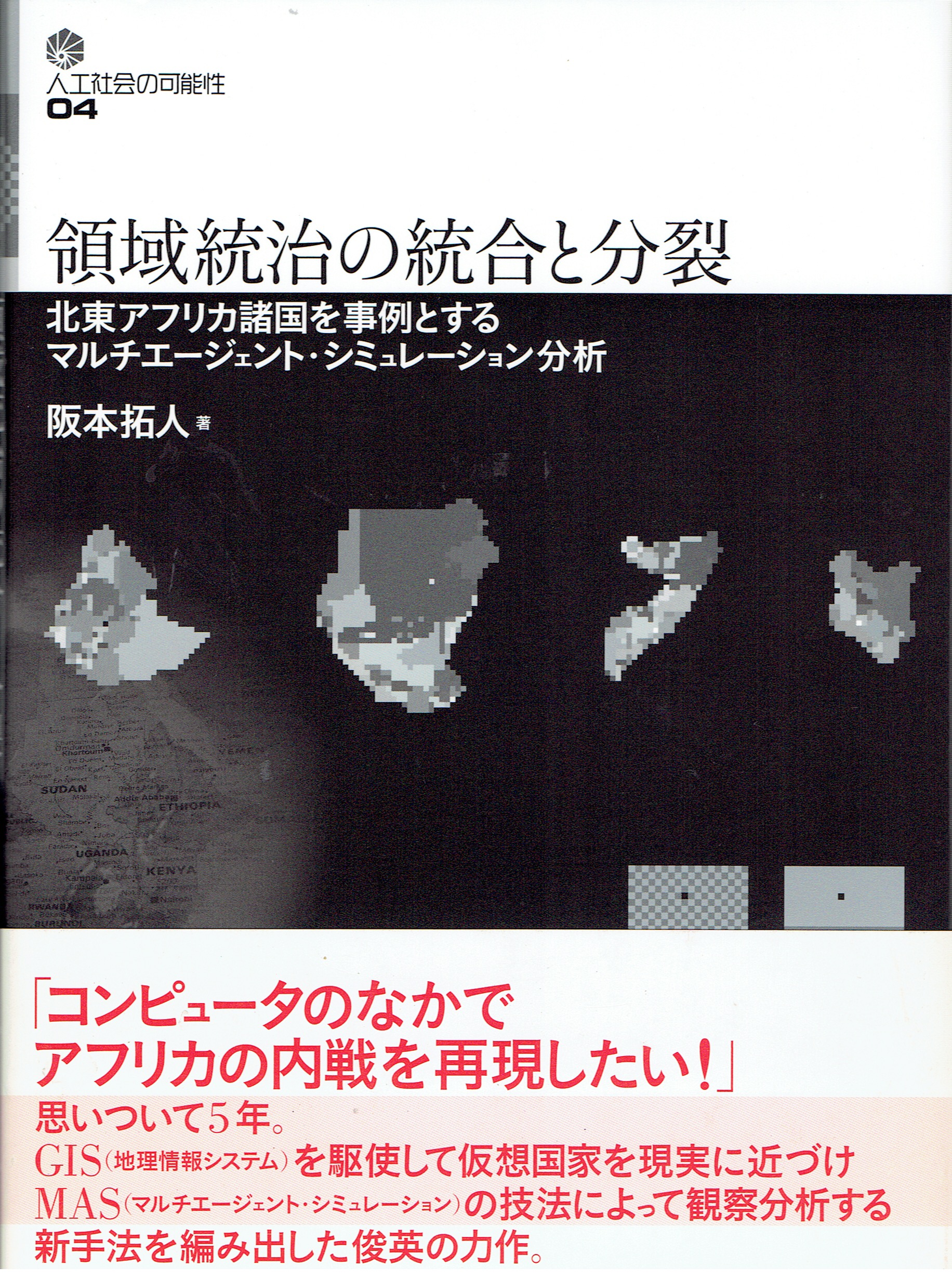 Ryouiki Touchi No Tougou To Bunretsu (Integration and disintegration of territorial rule: Multi-agent simulation of conflicts in Northeast Africa)

States in Sub-Saharan Africa, most of which came into existence only after the late 1950s, have often experienced difficulty in their endeavors to maintain and consolidate territorial rule. Many of these states have suffered from a varying degree of political instability since their respective independence. Some have even experienced outright civil wars, which have had serious consequences on the integrity of these entities, including the complete disappearance of public authority (e.g., Somalia). The post-Cold War scholarship of international relations has seen rising interest in the highly fragile nature of these African states, producing various descriptive categories of statehood such as “quasi states,” “failed states,” and “collapsed states.”

In this book, I analyze the volatile politico-military dynamics of African states while paying attention to the considerable diversity observed in these dynamics. Empirically, I take cases from Northeast African countries (Ethiopia, Kenya, Somalia, and the Sudan) where different patterns and dynamics of territorial rule have historically been observed. Methodologically, I employ a novel computational approach that combines multi-agent simulation (MAS) and a geographic information system (GIS). Using these tools, I construct “virtual Northeast African states,” which have spatial compositions similar to those of the corresponding states in reality, such as population distribution and ethno-linguistic distribution. On the territories of these virtual states, I then simulate political and military competition between the central government and insurgent organizations under different parameter settings. This competition, which also entails mobilizing loyalty and support from inhabitants in a given locality, can drive the macrodynamics of territorial integration and disintegration of a virtual state in diverse directions. I compare the dynamics that are generated in each virtual state with those actually observed in the corresponding African state to locate factors that can explain the diverse empirical patterns of the territorial rule of sovereign states.

The main result of this research is that these virtual states often show dynamics of integration and disintegration that are strikingly similar to those observed in reality. For example, in a broad range of parameter settings, “virtual Sudan” suffers from a persistent tendency towards north-south division, mostly in the same fashion as its empirical counterpart. Similarly, the territorial rule of “virtual Somalia,” just as that of actual Somalia, frequently disintegrates amid a multi-sided civil conflict. Since these patterns are generated from a simple model that is seeded with a limited set of spatial data, such as ethno-linguistic distribution, the major implication is that the spatial configuration of a state strongly conditions its territorial integrity. In the book, I further extend the original simulation model in a series of hypothetical experiments, including, among others, a restructuring of the central government and the introduction of territorial decentralization. These extensions pave a way for more practical, policy-oriented uses of the model to pursue the peace and unity of the states concerned.

(Written by Takuto Sakamoto, Associate Professor of Graduate School of Arts and Sciences / 2018)