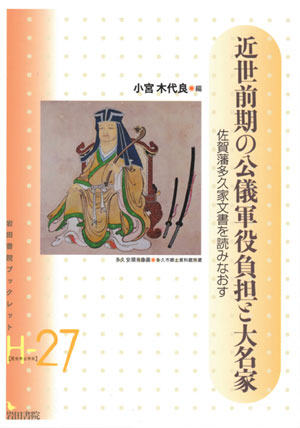 Kinsei-Zenki no Kōgiguneki to Daimyō (The Burden of Official Military Service in the First Part of the Early Modern Period and Daimyō Families: Rereading Documents of the Taku Family of Saga Domain)

This book is an interim report on a joint research project spanning several years that has been conducted by more than a dozen people made up of staff (including the editor) of the Early Modern Materials Department at the Historiographical Institute, University of Tokyo, and employees of museums, libraries, and local government departments involved in the administration of cultural properties in Saga prefecture.

However, this book also had another objective. As is indicated by the subtitle, this was to reread a known corpus of historical sources. The documents of the Taku family are a vast collection of documents dating chiefly from the medieval through to early modern periods that have been passed down by the Taku family, a family of senior vassals of Saga domain, and they are currently held by the Taku City Folk Museum. In the 1960s, more than 700 documents dating from the medieval period through to the start of the early modern period were published in typeset form by Professor Miyoshi Fujio of Saga University as part of the Collection of Historical Sources of Saga Prefecture, compiled by Saga Prefectural Library. The reason that we set about “rereading” the documents of the Taku family included in the Collection of Historical Sources of Saga Prefecture was as follows.

One of the series being published by the Historiographical Institute is Chronological Source Books of Japanese History, and in order to compile the volumes dealing with the early Edo period, there is another task that needs to be undertaken concurrently. The quantity of historical materials that have been preserved in Japan down to the present day increases geometrically from the latter part of the medieval period onwards, and once we come to the early Edo period, in particular, their regional spread also grows. In order to compile the volumes dealing with these materials, it is necessary to determine the date of each document. Up until now, a considerable number of documents, mainly from daimyō families, have been published in typeset form and have been dated as best as possible. But their dating is still inadequate, and as for documents of the families of daimyō retainers, which have survived in vast quantities, their dating is by and large a task for the future. At the same time, in order to add depth to the study of local history, it is necessary to utilize the collections of materials preserved in each locality as source material for research and to increase the number of researchers able to deal with these materials.

As mentioned, the documents of the Taku family included in the Collection of Historical Sources of Saga Prefecture represent part of a collection of documents of a family of daimyō retainers that was published at a fairly early stage, and they have made a huge contribution to subsequent advances in related research. But more than fifty years have elapsed since their publication, and during this time there have been considerable advances in the analysis of other related collections of source materials. In addition, perhaps because the large number of documents included in the Collection of Historical Sources of Saga Prefecture were edited virtually by one person who was, moreover, under time constraints imposed by the publishing schedule, findings regarding the identification of people and the dating of documents were with some exceptions not included.

This current project, premised on the above shared understanding, was started as a special joint research project carried out by the Historiographical Institute in its capacity as a Joint Usage/Research Center, and since then it has been funded by a grant-in-aid for scientific research and is now in its seventh year. All participants in the project have access to high-definition images of the documents, and for each document one of the participants checked the original document and considered the logically determinable date by ascertaining the places of residence of the person who produced the document and other relevant people, the document’s contents and format, related sources, etc. The present book is based on papers presented at a symposium held in Taku, and as is evident from its table of contents, an important pillar of this book is clearly indicating the process of determining the dates of documents.

Continuing to carry out the tasks described above with respect to the vast corpus of transmitted historical sources is indispensable for improving the precision of our historical research and also our understanding of history. And this is, I believe, something that will need to be reviewed every fifty or one hundred years.