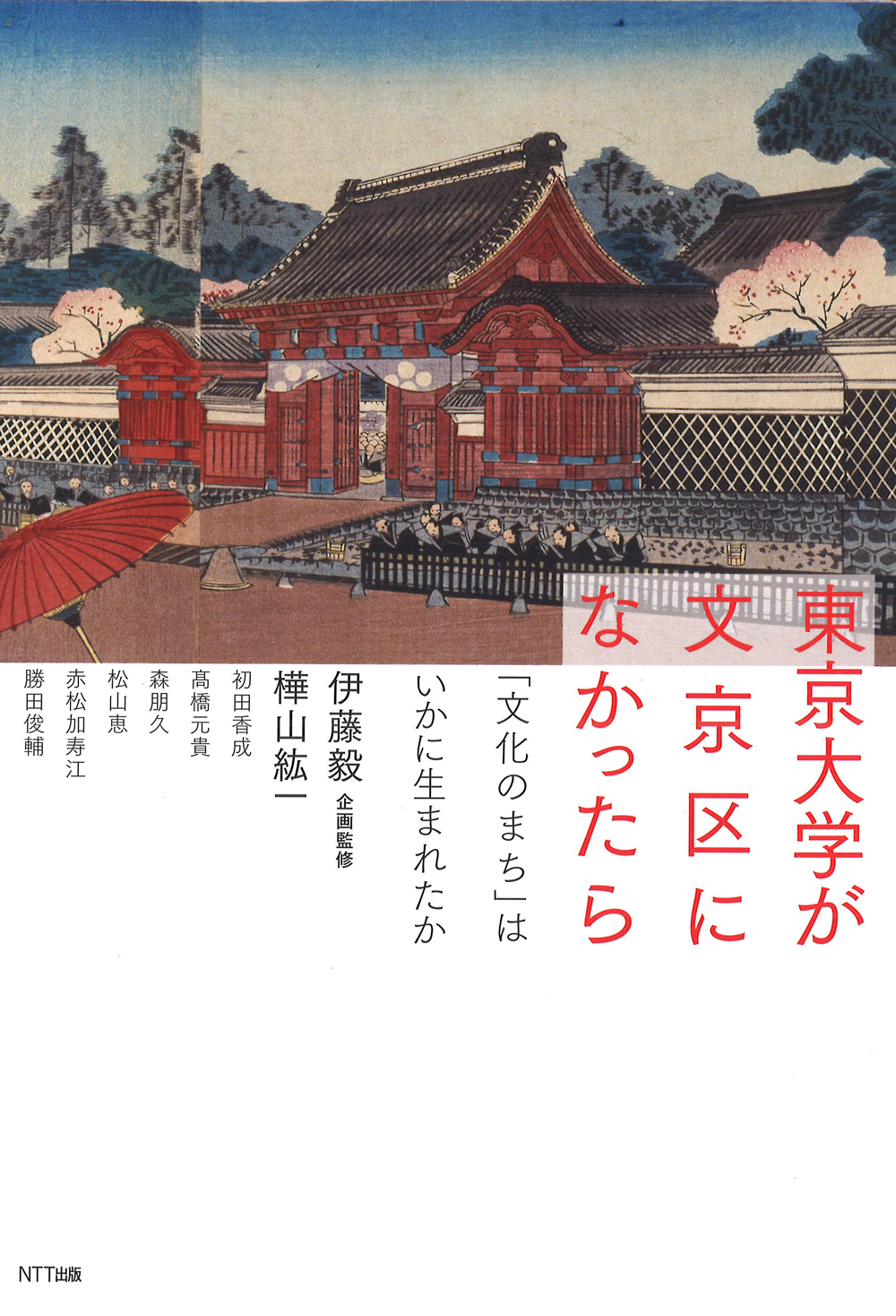 Tokyo Daigaku ga Bunkyo ku ni nakattara (If The University of Tokyo had not been in the Bunkyō Ward - How was the “Town of Culture” born?)

We are seeing a major increase in the number of books about the various regions of Japan, including several books about the Bunkyō Ward. This book differs from other Bunkyō Ward books in several ways. First, it includes three conversations between Kabayama Kōichi and Itō Takeshi that readers will find intellectually stimulating and enlightening. Kabayama Kōichi is one of present-day Japan’s most prominent historians. In addition, he has lived in the Bunkyō Ward for many years and has been deeply involved in local affairs. Itō Takeshi, while shifting his research interest from the history of architecture to that of “territory,” has expanded his subjects to include not only Japan but also Europe and Asia. Second, six other researchers contributed essays discussing the formation of the ward from extremely diverse frameworks, reflecting their own research interests.

Although the book is free ranging, its discussions do not lack scholarly rigor. This book is both a work of historical research (referencing ancient manuscripts, old maps, and diverse statistical documents) and a presentation of the fruits of fieldwork (incorporating the results of interview surveys and on-site investigations). As a result, the book succeeds in revealing the following points.

The Bunkyō Ward is, as evidenced by its reputation as a location with many slopes, a hilly district. Here, one can discover Chinzansō and other gardens and mansions that take advantage of its topography. Also, the Bunkyō Ward includes uptown residential neighborhoods, as one would generally imagine it to. However, it also retains the atmosphere of a farming community. In the Edō Period, inland transport roads carrying vegetables from northern Kantō passed through this district, and one of Edō’s largest vegetable markets was located in Komagome. In addition, the former Koishikawa District had the largest farmland area in all of urban Tokyo during the Meiji Period. The Bunkyō Ward was established by combining the Koishikawa District with the former Hongō District, which had been Tokyo’s major miso production region since the Edō Period. However, between the Meiji and Shōwa Periods, the Koishikawa District, in particular, was rapidly transformed from a farming community into the leading printing center of Japan; the major printing companies Kyōdō Printing and Toppan Printing are located in this district.

Another factor that has contributed to the rapid transformation of the Bunkyō Ward is its status as a preeminent center of education in Japan. There are many universities within its boundaries. However, The University of Tokyo, the main institution in the ward, is located in the southeastern part of the Bunkyō Ward, which reflects the University’s origins in the Shōheizaka Gakumonjō (adjacent to the Kanda District) and Kaisei School (in the Kanda District). However, when considering the ward’s reputation as the home of numerous educational institutions, it is impossible to ignore the other universities established here, one after another, and its active primary education activities. That being said, the Bunkyō Ward has been more than an educational district. During the Meiji Period, the Tokyo Arsenal was located here. Later, this became the site of the Kōraku-en Baseball Stadium and a bicycle racing track. It is also known as a martial arts center; for instance, the Kōdōkan Jūdō Institute was established in the Bunkyō Ward during the Meiji Period.

The book also reports on the transformation of the residential areas of the Bunkyō Ward. Due to the number of educational institutions within its boundaries, the Bunkyō Ward boasted the largest number of dormitories, as compared to any other part of Tokyo, from the late Meiji Period to the Early Shōwa Period. In addition, another form of collective dwelling that prospered is the apartment building, a new form of housing for Japan’s prewar, white-collar workers. Then, in the post-war years, with the growth of the tourism industry, the Bunkyō Ward and especially the Hongō neighborhood, developed into one of Tokyo’s leading ryokan districts. The high-rise mansions that now stand in rows along the trunk roads tell another story of the Bunkyō Ward, one that is distinct from those of its older forms of collective dwelling.

The book, summarized briefly above, makes an important and interesting contribution to the understanding of a unique region in the history of modern Tokyo.

(Written by Shunsuke Katsuta, Professor of Graduate School of Humanities and Sociology / 2018) 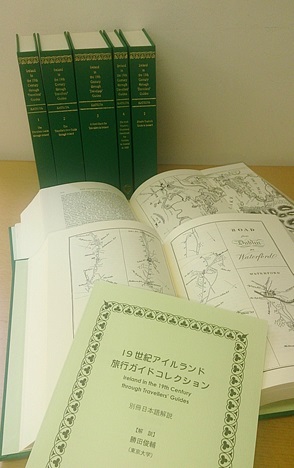 Shunsuke Katsuta “Ireland in the 19th century through travellers’ guides” 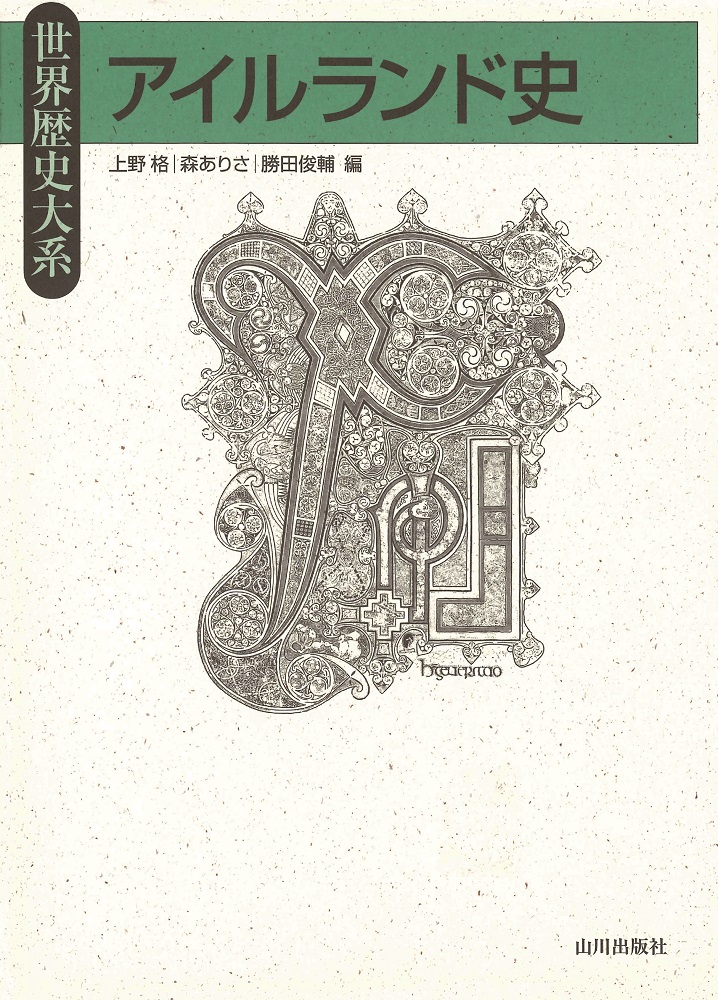 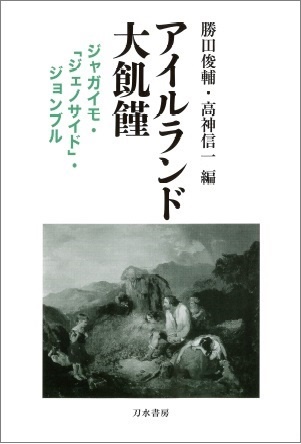