The idea of catching light has fascinated mankind for centuries. A famous traditional German story tells how the people of the small town “Schilda” tried to fill up bags with light to illuminatee their houses which they had constructed without windows. They quickly learned that it was difficult to trap light without simply being absorbed. It still is. Now, a Japanese-German team of researchers coordinated by physicist Martin Silies have reported a breakthrough towards light-localization in random nanostructures. In the May issue of Nature Photonics scientists from the Universities of Tokyo, Oldenburg, and Ilmenau succeeded in resolving in real time how light gets trapped in a random array of tiny zinc oxide nanoneedles. This research may lead to the development of new light sources and new possibilities in its use as an energy source. 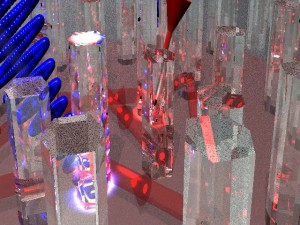 “You can think about these tiny needles as a maze for light,” says Martin Silies. “After the light has entered the needle array it is difficult for it to find a way out. The problem is that light is extremely fast. Therefore we had to develop a new microscope with very high time resolution to resolve these ultrafast processes. We realized this by using ultrashort laser pulses with a duration of only a few femtoseconds (1 femtosecond is the millionth part of one billionth of a second) to illuminate the needle array. These pulses are shorter than the storage time of the light inside the needle array, allowing us to directly probe its time structure.”

“At first sight this sounds like pure basic research, yet it is directly relevant for applications,” explains Christoph Lienau, head of the Ultrafast Nano-Optics group at the Institute of Physics of the University of Oldenburg, who coordinated the project together with Takashi Yatsui and Motoichi Ohtsu from the University of Tokyo. “The efficiency of solar devices, for example, can be enhanced if we manage to capture sunlight and increase its storage time inside the solar cell.” Lienau highlights that this breakthrough was an excellent team effort of the groups in Tokyo, his own team and that of Erich Runge in Ilmenau, Germany, and became possible only by the generous funding by the Deutsche Forschungsgemeinschaft and the Japan Science and Technology Agency. Prof. Lienau concludes: “We hope to continue this fruitful cooperation and strive to apply our results towards enhancing the efficiency of photovoltaic devices as well as to develop entirely new kinds of nano-lasers.”

This research was supported by the Japan Science and Technology Agency (JST) and the Deutsche Forschungsgemeinschaft (DFG) within the ‘Nanoelectronics’ programme.

Ilmenau University of Technology, Department of Theoretical Physics I