Dogs, like humans, yawn more often when they see a familiar person yawning than when they see a stranger. A new study by Todai researchers has shown that this response is not just a sign of anxiety but an empathy-linked behavior. 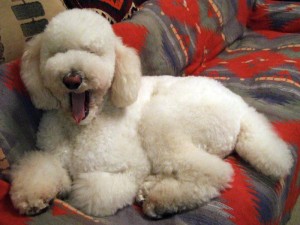 © Toshikazu Hasegawa, Dogs are able to catch yawns from humans

Contagious yawning, or yawning after seeing or hearing another individual yawning, is of particular interest to scientists who study empathy since its occurrence has been associated to our ability to understand and interpret another’s emotions. It has been known that several primate species, including humans, chimpanzees, bonobos, or baboons, are able to yawn when others yawn. But what about other species?

In recent years, research on contagious yawning has been expanded to dogs since they are excellent models to explore inter-species (dog ? human) empathic abilities. Results, however, have been inconsistent regarding whether dogs have the ability to yawn contagiously and whether this ability is linked to empathy or just a mild distress response (dogs tend to yawn when they are stressed).

Researchers from the University of Tokyo recruited 25 dogs and had their owners and a stranger yawn at them. As the team has reported in PLOS ONE, not only dogs were able to catch yawns from humans, but they did it more frequently when the model was their owner, suggesting that the process is mediated by emotional bonds. This study goes further than any previous study in supporting the empathic bias, since the telemetric measures of dogs’ heart rate taken throughout the experiment indicate that subjects’ anxiety levels did not change, ruling out the possibility that yawns were the result of arousal.

“Our findings are consistent with the view that contagious yawning is modulated by affective components of the behavior and may indicate that rudimentary forms of empathy could be present in domesticated dogs”, Teresa Romero and colleagues write in their study. This research may lead to a better understanding of the ability of different dog breeds to process human social cues and their suitability for various roles in human society.

Department of Cognitive and Behavioral Sciences, Graduate School of Arts and Sciences