Two micro-satellites “Hodoyoshi-3 & 4″ developed by the University of Tokyo under the FIRST program of Cabinet Office of Japan were launched at local Yasny time June 20, 1:11 (June 20, 4:11 am Japanese Standard Time) by the Dnepr Launch Vehicle at Yasny Launch Base in Russia. This research was led by Professor Shinichi Nakasuka in the Department of Aeronautics and Astronautics at the University’s Graduate School of Engineering. The satellites are now in their initial operation phase and are capturing Earth images with wide angle, 40m, and 240m resolution cameras. These images have been downlinked (transmitted) to the ground station and are now available for viewing on Facebook and YouTube. 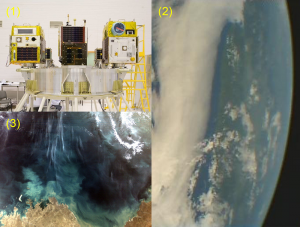 Hodoyoshi-3 and 4 aim to innovate the concept of satellite development, which until now has required enormous amounts of money and long periods of time. By reducing the cost per satellite to less than three million USD and development time below two years, we expect that novel space utilizations and new space users will appear, creating new industries of space development and novel applications. For example, low cost and quick development satellites will enable frequent Earth observation using a large number of satellites or the concept of the “personal satellite.”

Hodoyoshi-3 has 40m and 200m GSD (ground sample distance) Cameras and Hodoyoshi-4 has a 6m GSD Camera to capture Earth remote sensing images, and both satellites have “Store & Forward” communication systems to receive various sensor data on ground by RF signal as well as “Rental Space” to accommodate user-specified objects in several 10cm cubic spaces in each satellite. These satellites both have a mass of approximately 60 kg and aim at demonstration of feasibility of practical applications of micro-satellites in space. Newly developed advanced components such as a high speed X-band transmitter and ion propulsion system will also be tested on Hodoyoshi-4. A “Heterogeneous Constellation” experiment, testing the use of two satellites with different capabilities in the same orbital plane, will also be carried out. Through these missions, we hope to demonstrate that micro-satellites can be utilized for novel and practical space applications.

Department of Aeronautics and Astronautics, Graduate School of Engineering

Nakasuka and Funase Laboratory, Department of Aeronautics and Astronautics, Graduate School of Engineering