Cellular slime mold Dictyostelium discoideum, a social amoeba, has a unique life cycle characterized by a unicellular growth stage and a multicellular fruiting body formed by cell aggregation. The signal for cells to aggregate is in the form of propagating waves of attractant molecules, and cells move in the direction of increasing concentration. However, because the attractant molecules propagate in the form of waves, the back of the wave provides a negative gradient that could potentially give rise to reverse cell movement. This conundrum has been known as wave “chemotaxis paradox”. How cells managed to move in one direction without being confused by this falling concentration remained unknown. 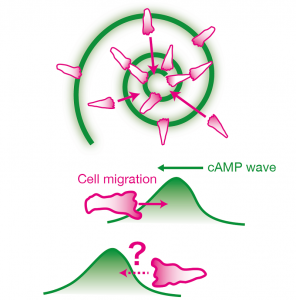 © 2014 Akihiko Nakajima and Satoshi Sawai.
Dictyostelium cells aggregate by moving towards the propagating waves of chemoattractant cyclic AMP (cAMP) (top). If the direction of cell motion is dictated solely by the gradient of attractant concentration, cells should move in the reverse direction on the back of the wave (bottom) and would thus be unable to gather together. The work revealed that cells are able to discriminate between the front and the back of the wave mainly by ignoring attractant gradients that are decreasing over time.

A research group lead by Associate Professor Satoshi Sawai at the University of Tokyo Graduate School of Arts and Sciences focused on the internal cellular response to an external signal. An internal signal is released from the edge of the cell that encounters the external signal to aggregate. The group discovered that this internal response in Dictyostelium cells is repressed when the stimulus is decreasing over a period of five to six minutes. The team has shown that this signal processing property ? known as ‘rectification’ and equivalent to the property of diodes that only pass current in one direction in computers and integrated circuits ? is best explained by an adaptive gradient sensing mechanism with a strong suppressive signal. This finding was made possible by combining technologies enabling high-precision laminar flow control in microchannels and quantitative measurement of intracellular reactions, and verification by theoretical models.

According to Dr. Sawai, the mechanism hints at how other moving cells such as immune cells combine more complex temporal and spatial cues in our tissues to determine their movement. This result will be of great importance in understanding and developing procedures for controlling the mechanisms of cell migration in immune response, wound healing and animal development including humans.