Olfactory signals characterized by odor identity and concentration are intermittently distributed in the environment. Odorant concentration is a key parameter for animals to localize vital odor sources such as partners or foods. Conventionally, concentration-response characteristics of central olfactory neurons have almost exclusively been investigated using single odor stimulus pulses. Consequently, their response dynamics to stimuli continuing over time are unclear. 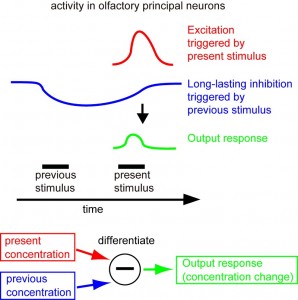 © 2015 Ryohei Kanzaki.
Schematic diagram of the mechanism of odorant concentration differentiation in the olfactory circuit.

Using the moth pheromone-processing circuit, a simple and well-defined system, the research group of Professor Ryohei Kanzaki and Terufumi Fujiwara (formerly, Graduate School of Information Science and Technology) at the University of Tokyo’s Research Center for Advanced Science and Technology demonstrated that concentration-response characteristics of olfactory neurons dynamically change upon exposure to intermittent stimuli. Furthermore, this leads to a transformation of the neural representation from encoding absolute concentration to encoding concentration relative to the prior stimulus. This is contrary to the common belief that absolute odorant concentration is encoded in a static manner, as may be implied when observing the system using the currently widespread method of single, temporally well-spaced stimuli.

This result indicates that by encoding odor concentration relatively, neural circuits can amplify and propagate minute differences in concentration, improving concentration identification and source localization. This transformation of concentration representation was performed by a central neuronal circuit mechanism rather than a peripheral mechanism. The key component of this function is a group of inhibitory interneurons in the primary olfactory center which suppress the activity of principal olfactory neurons. Long lasting-inhibition from the inhibitory neurons triggered by previous odorant stimulus functions as a short-term memory of prior stimulus magnitude and suppresses the excitation of principal neurons to the current stimulus. Suppression is in proportion to the intensity of the prior stimulus, thereby differentiating the odorant concentration.

This newly discovered olfactory processing mechanism shares similarities with other adaptive phenomena both in olfactory sensory systems and other modalities, but most notably works on discontinuous input. The circuit mechanisms identified in the current research are therefore of general interest, in particular in the scope of sensory neuroscience dealing with natural stimulus conditions and stimulus-guided behaviors.

Laboratory of Kanzaki and Takahashi, Research Center for Advanced Science and Technology