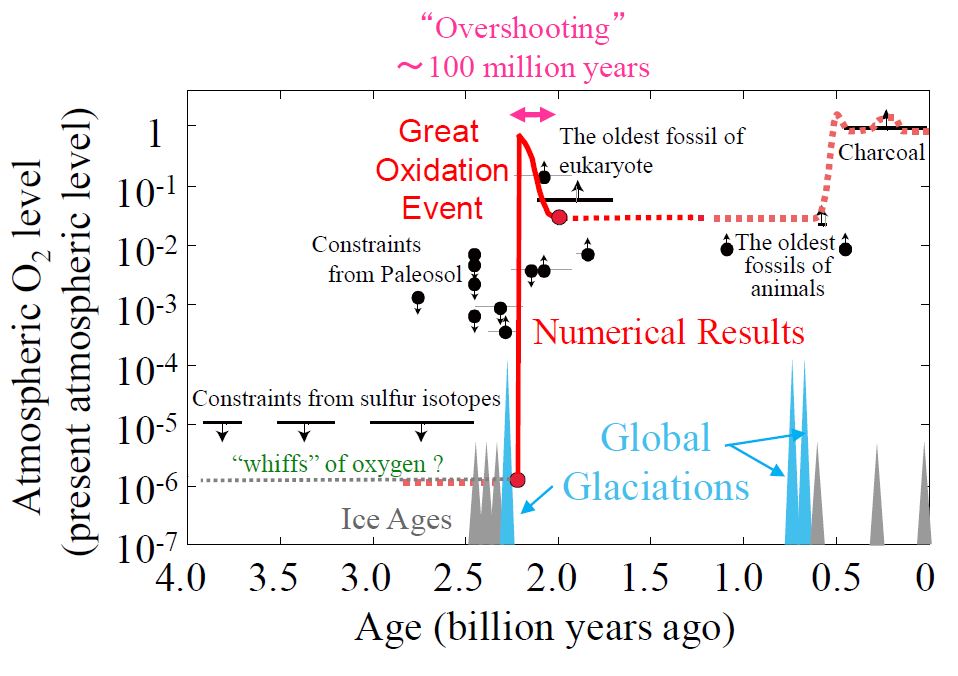 It is considered that the first, rapid rise of atmospheric oxygen occurred around 2.2 billion years ago. On the other hand, there is geological evidence in South Africa for the occurrence of a global glaciation, termed a “snowball Earth” event, just before the rise of oxygen levels. However, the causal relationship between the atmospheric and climatic changes and the mechanism for the rise of oxygen remain unknown.

From simulations based on theoretical modeling of climate, atmospheric chemistry, and biogeochemical cycles, University of Tokyo Graduate School of Science graduate student Mariko Harada, Graduate School of Frontier Sciences Professor Eiichi Tajika and Graduate School of Science Associate Professor Yasuhito Sekine have shown that the rise of oxygen is an inevitable consequence of the snowball Earth event. The same model also showed that the level of oxygen overshot up to the present level for 100 million years and then stabilized at 1/100 of the present atmospheric oxygen level. The oxygen level rapidly rose again to the present level at around 600 million years ago, an event which is also highly likely to have been triggered by another snowball Earth event in Earth’s history.

These findings provide important insights into the history of our planet; that is, the oxygen we breathe today must have been derived from snowball Earth events. To reveal a relationship between the rise of atmospheric oxygen concentration 2.2 billion years ago and the evolution of life is a critical issue for future research.

Department of Earth and Planetary Science, Graduate School of Science