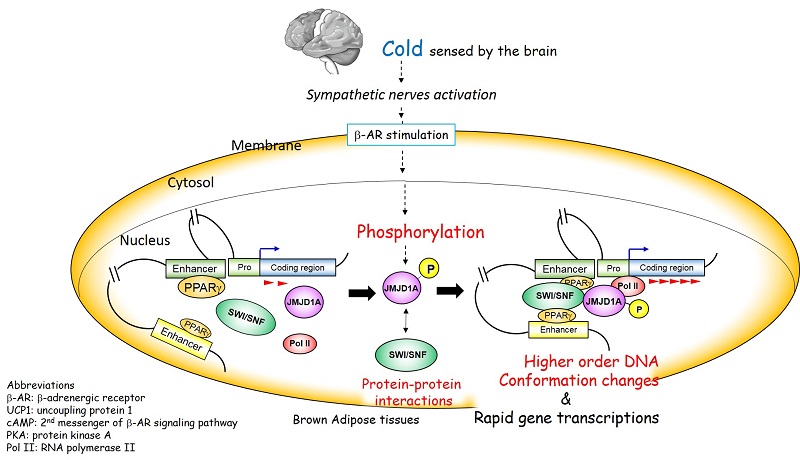 A research group at the University of Tokyo have demonstrated that, in addition to previously known transcription factor-mediated gene expression, rapid conformational change of higher order chromatin structure is required to maintain body temperature in cold conditions.

Humans and other mammals have systems that respond instantly to protect the organism against sudden environmental changes. For example, when mammals are exposed to dangerously cold temperatures, the central nervous system senses this and issues a command via the sympathetic nervous system to brown fatty tissue, triggering rapid heat production and protecting the body from hypothermia. The same research group had already shown that deficiency of the protein JMJD1A resulted in obesity and cold intolerance, but the mechanism by which this came about remained unknown.

The research group of Professor Juro Sakai at the Research Center for Advanced Science and Technology (RCAST) has revealed that, in addition to previously known transcription factor-mediated gene expression, rapid conformational change of higher order chromatin structure is essential for rapid expression of genes that stimulate heat production in response to cold temperature conditions.

The signal sensing molecule JMJD1A, located in the cell’s nucleus, is phosphorylated in response to the stimulus of cold exposure. This phosphorylation triggers the assembly of multiple proteins into a protein complex that activates gene expression through conformational changes of gene structure. This series of changes occurs in minutes and rapidly activates thermogenic gene expression.

These findings suggest that JMJD1A is a potential target for therapeutic approaches to the prevention and treatment of hypothermia or obesity resulting from reduced energy expenditure.