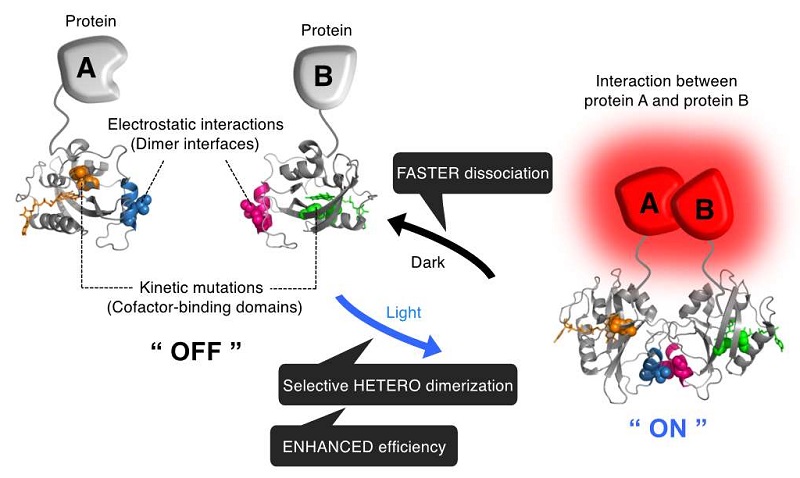 Schematic of the present photoswitching proteins acting as switches upon irradiation with blue light.
The research group engineered Vivid proteins to recognize each other based on an electrostatic interaction introduced into the dimer interfaces. By introducing mutations into cofactor-binding regions, the research group developed pairs of variants with both faster switch-off kinetics and enhanced dimerization efficiency. By linking the new photoswithing proteins to various proteins, they are able to optogenetically control the activity of those proteins (e.g. interaction between protein A and protein B) by irradiation with light.
© 2015 Fuun Kawano and Moritoshi Sato.

A research group at the University of Tokyo has developed small photoswitching proteins that enable the highly accurate control of the activity of various intracellular molecules at will by irradiation with light.

Postdoctoral fellow Fuun Kawano, Associate Professor Moritoshi Sato and their research group at the Graduate School of Arts and Sciences focused on a small fungal photoreceptor, named Vivid, to which they applied a variety of modifications using genetic engineering techniques. As a result, the research group succeeded in developing a small photoswitching protein controllable with a temporal resolution of seconds by irradiation with blue light. The photoswitching proteins have been named “Magnets.” Furthermore, the research group has demonstrated that Magnets can control the direction of cell motion (cell polarity) at will by blue light.

This new photoswitching protein offers a powerful tool for a deeper understanding of molecular processes in biological systems, and are expected to underlie the development of new technologies to recruit living cells to any area, to control cell proliferation, cell differentiation and cell death at any area, and to conduct gene therapy at any tissue in living organisms.