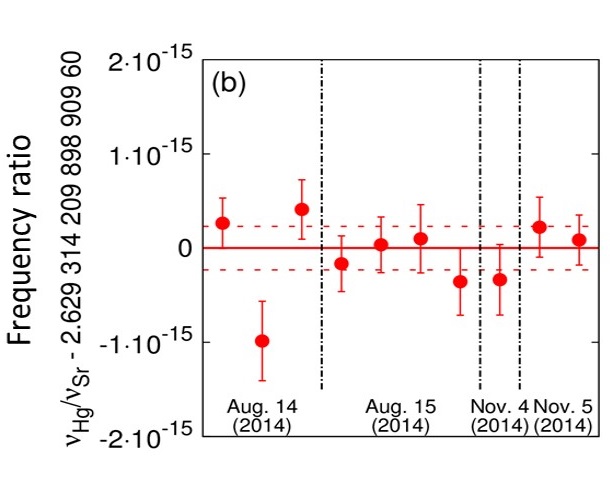 Frequency ratio of mercury (Hg) and strontium (Sr) based optical lattice clocks
Measured frequency ratio between mercury and cryo-strontium clocks. The ratio measurements carried out with a 3-month interval, where the solid red line and dashed red lines show the weighted mean and the total uncertainty of 8x10-17.
© 2015 Hidetoshi Katori.

A University of Tokyo and RIKEN research group has developed a mercury-based optical lattice clock and measured the mercury clock frequency using the same group’s recently developed strontium-based optical lattice clock as a reference. The research group achieved a fractional frequency uncertainty, which is smaller than the realization of the current international standard definition of the second.

Optical lattice clocks, as a possible future international standard, are currently being developed all over the world aiming at nearly 1,000 fold improvement in uncertainty over International Atomic Time (TAI) based on microwave cesium clocks. One major challenge in reducing the uncertainty of optical lattice clocks is to eliminate the influence of electromagnetic waves radiated from the surrounding walls at room temperature (blackbody radiation), which perturbs the transition frequency of atoms.

To address this issue, Professor Hidetoshi Katori’s (Chief Scientist, RIKEN) research group at the University of Tokyo Graduate School of Engineering and RIKEN has developed an optical lattice clock based on a stabilized ultraviolet laser and mercury atoms, which are at least ten times less sensitive to blackbody radiation compared to other candidates for optical lattice clocks such as strontium and ytterbium atoms. Direct optical frequency comparison between the mercury clock operating at room temperature and the cryo-strontium clock previously developed by the group has yielded a frequency ratio with the a fractional uncertainty of 8x10-17, a precision greater than a cesium atomic clock.

Determination of the frequency ratio with an uncertainty less than that realized by the current definition of the second is an essential step towards the redefinition of the second. Furthermore, such a highly-precise clock comparison can be a probe for new physics by investigating the constancy of physical constants. For example, high-precision frequency comparison of clocks consisted of different atomic species can be used to investigate temporal variation of the fine structure constant.