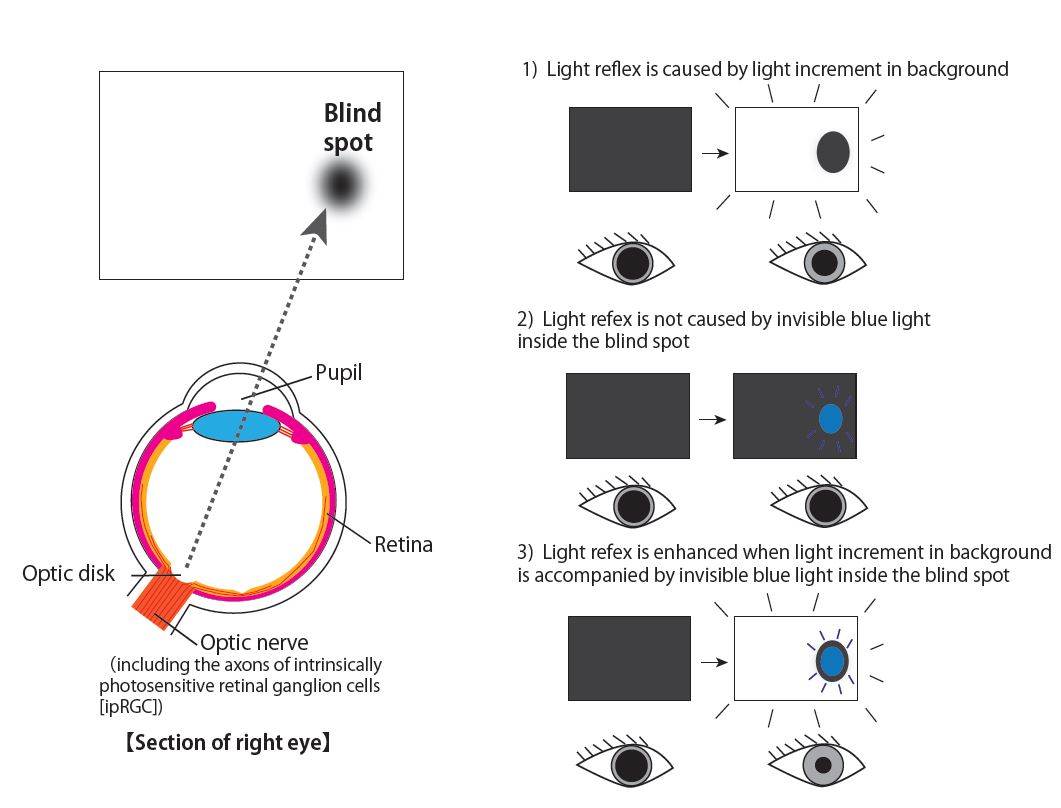 University of Tokyo researchers have found that the light reflex of the pupil is modulated by light stimulation inside the blind spot in normal human observers, even though that light is not perceived.

The human retina contains some 100 million photoreceptor cells. When these are stimulated with light, they communicate that information to the brain and we perceive light. However, the optic nerve and blood vessels pass through the region of the retina called the optic disk, which contains no photoreceptors. Light falling on this blind spot is therefore never consciously seen. On the other hand, if a donut-shaped ring of light is targeting to the area around the blind spot, we perceive it as if light were present inside the blind spot itself as well.

Japan Society for the Promotion of Science Postdoctoral Fellow (PD) Kentaro Miyamoto at the Graduate School of Medicine, and Associate Professor Ikuya Murakami at the Department of Psychology, Graduate School of Humanities and Sociology, discovered that when light impinges on the photoreceptor-free blind spot alone the pupillary reflex does not occur, but the pupillary reflex is enhanced in response to bright illumination in a normal part of the retina when blue or white light containing shorter wavelengths is simultaneously delivered inside the blind spot.

One possible explanation for these seemingly contradictory results is that the blind spot contains the axons of retinal ganglion cells, especially those that are intrinsically photosensitive. Thus, it is proposed that neural signals originating from light reception at photoreceptors are modulated by light reception in these ganglion cells.

Taking advantage of the unique place occupied by the blind spot will make it possible for researchers to further elucidate the processes underlying adaptive controls in response to light stimulation onto the retina, including pupillary reflex and circadian rhythm. “Future research will be directed at possible influences of blind-spot stimulation on conscious or unconscious visual decision processes, and thereby toward the understanding of multiple information processing tracks in the brain,” says Associate Professor Murakami.

Department of Psychology, Division of General Culture, Graduate School of Humanities and Sociology

Inquiries about the content of this page: Graduate School of Humanities and Sociology / Faculty of Letters