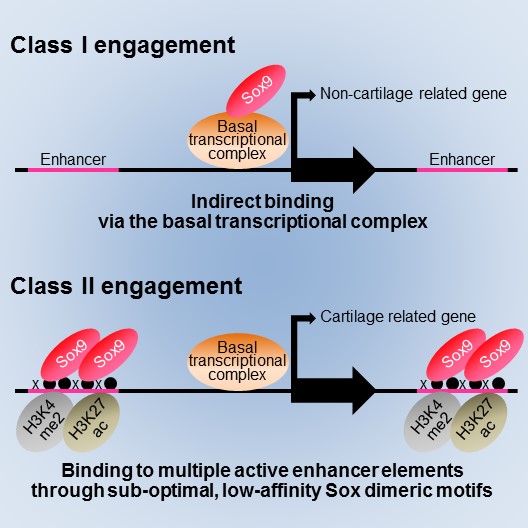 Researchers at the University of Tokyo have identified modes of Sox9 action during cartilage formation by analyzing big data on Sox9 location, chromatin state, and gene expression over the whole mouse genome. This finding will contribute to the understanding of cartilage diseases caused by genomic mutation and genome-based drug discovery for disease therapies.

Cartilage generated in embryos not only regulates skeletal growth until puberty, but also plays a key role in our locomotion as articular cartilage in our joints. Cartilage formation (chondrogenesis) requires the normal function of Sox9, a protein that regulates the expression of chondrogenesis-related genes. Mutation around the region of the human SOX9 gene, which encodes the Sox9 protein, causes campomelic dysplasia, a congenital disease that is accompanied by skeletal abnormalities and other conditions. Although the mechanisms underlying Sox9-mediated transcriptional regulation during chondrogenesis have been intensively investigated at a certain genomic region, its genome-wide regulation remained unclear.

Project Associate Professor Shinsuke Ohba at the Department of Bioengineering, the University of Tokyo Graduate School of Engineering, identified two genome-wide modes (Class I and Class II engagement) of Sox9 action in transcription during chondrogenesis. In Class I engagement, Sox9 binds indirectly to the DNA and regulates the transcription of genes involved in basal cell activities. In Class II engagement, it binds directly to the DNA in multiple locations and activates transcription of cartilage-related genes.

“This finding will contribute to the understanding of cartilage-related degenerative diseases and congenital abnormalities that are caused by genomic mutation and genome-based drug discovery for treatment of diseases and cartilage regeneration,” says Ohba.

This work was published in the online version of Cell Reports (Cell Press) on July 2, 2015. This research was carried out in collaboration with Professor Andrew P. McMahon at the University of Southern California.