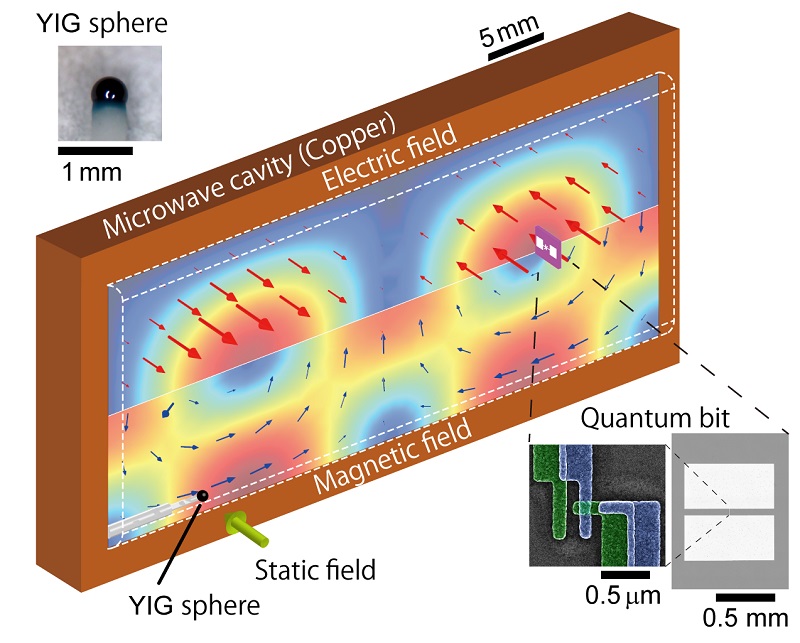 Illustration of magnet-qubit coupled system
A magnet (ytterium iron garnet; YIG) and a superconducting qubit are placed with a separation of 4 cm. The electric field in the cavity interacts with the qubit, while the magnetic field interacts with the magnet. At an extremely low temperature of around -273 degrees centigrade, magnons, i.e., quanta of the fluctuations in the magnet, coherently couple with the qubit through the electromagnetic field of the cavity.
© 2015 Yutaka Tabuchi.

Researchers in the University of Tokyo have demonstrated that it is possible to exchange a quantum bit, the minimum unit of information used by quantum computers, between a superconducting quantum-bit circuit and a quantum in a magnet called a magnon. This result is expected to contribute to the development of quantum interfaces and quantum repeaters.

Magnets, often used in our daily life, exert a magnetic force produced by a large number of microscopic magnets – the spins of individual electrons – that are aligned in the same orientation. The collective motions of the ensemble of spins are called spin waves. A magnon is a quantum of such excitations, similar to a photon as a quantum of light, i.e., the electromagnetic wave. At room temperature the motions of electron spins can be largely affected by heat. The properties of individual magnons have not been studied at low temperatures corresponding to the “quantum limit” where all thermally-induced spin fluctuations vanish.

The research group of Professor Yasunobu Nakamura at the University of Tokyo Research Center for Advanced Science and Technology has succeeded for the first time to couple a magnon in a magnet to a photon in a microwave cavity at an ultralow temperature near absolute zero (-273.14 degrees centigrade). They observed coherent interaction between a magnon and a microwave photon by placing a millimeter-sized ferromagnetic sphere made of yttrium iron garnet in a centimeter-scale microwave cavity.

The results will stimulate research on the quantum behavior of magnons in spintronics devices and open a path toward realization of quantum interfaces and quantum repeaters.