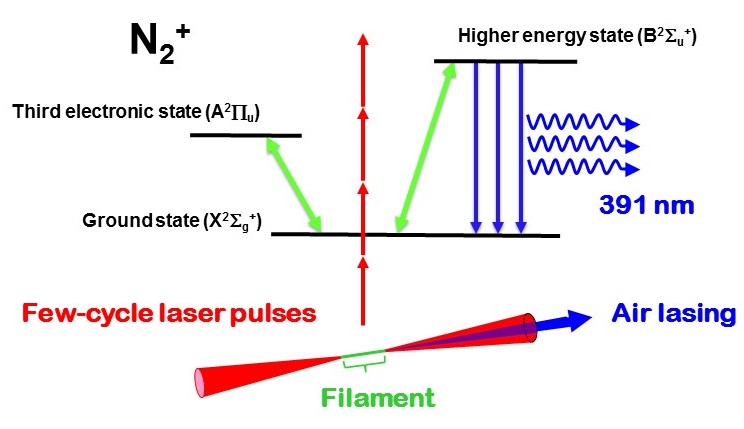 Three-level mechanism of lasing in air
Schematic image of laser filament generated by focusing few-cycle laser pulses and the mechanism of the lasing action in air in which three electron states are involved.
© 2015 Kaoru Yamanouchi.

University of Tokyo researchers have discovered the mechanism of “air lasing.” Irradiating air with a short laser pulse ionizes nitrogen molecules and fulfills the conditions required for laser amplification. The third electronic state plays an important role in this process. This research will help elucidate the mechanisms of light emission from laser plasma and light amplification in a variety of media.

It was known that when a molecule is photoionized (ionized by irradiation with light), molecular ions are preferably produced in the electronic state with the lowest energy, called the ground state. However, it was also observed that when air is ionized by a laser, the nitrogen ions emit coherent light (lasing) with a wavelength of 391 nanometers, the optical transition from an excited state in the higher energy to the ground state. The physical mechanism behind the “population inversion” in which more ions are produced in the higher energy state than the ground state, leading to the lasing, had not been identified.

In order to solve the puzzle of the population inversion mechanism in air, Professor Kaoru Yamanouchi’s group at Department of Chemistry, School of Science, used extremely short few-cycle pulsed laser light whose duration is of 4 to 6 femtoseconds to ionize air and carried out numerical simulations based on a theoretical model. In the spectrum of the light emitted from a laser filament, the lasing transition at 391 nm originating from the transition from the high energy state to the ground state was identified. It was also revealed that a lower lying intermediate electronic state was crucial to explaining the population inversion. While the intermediate third electronic state is not involved in the lasing transition at 391 nm, it is coupled to the ground state by the strong few-cycle laser pulse. This reduces the number of ions in the ground state, resulting in a larger population in the higher energy electronic state.

“The discovered mechanism will explain lasing phenomena and laser amplification mechanisms in laser-induced filaments in a variety of media.” says Professor Yamanouchi.