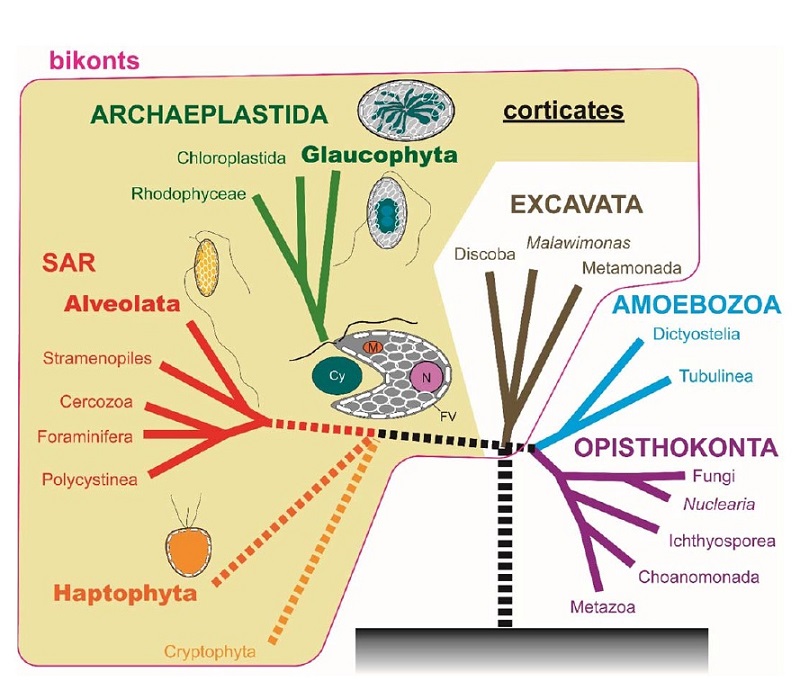 A diagram showing the hypothetical evolutionary origin of the first plant
The first plant that acquired a chloroplast by the endosymbiosis of an ancient cyanobacterium might have exhibited a 3D ultrastructure in which the whole cell membrane is tightly backed by numerous leaflet-like flattened vesicles as observed in the Glaucocystis cell in the present research. A similar ultrastructure is found in other eukaryotic groups such as Haptophyta, Cy: cyanobacterium; Fv: flattened vesicle; m: mitochondrion; N: nucleus.
© 2015 Toshiyuki Takahashi.

A University of Tokyo research group has revealed the microscopic 3D internal structure of cells of Glaucophytes, thought to be the most primitive type of plant cell, and inferred the structure of first photosynthetic plant cells formed through symbiosis with cyanobacteria some one to two billion years ago. This research will deepen our understanding of origins of photosynthetic plants by revealing the microstructures of other eukaryotic cells (cells with a nucleus or other membrane-bound structures).

The biological activity of almost all living things on Earth is based on energy ultimately originating from sunshine first received by chloroplasts in plants. It is generally thought that chloroplasts originated with the symbiosis of a cyanobacterium in a eukaryotic cell, from which the first plant evolved one to two billion years ago. However, details of this ancient first plant have remained uncertain.

The research group of Associate Professor Hisayoshi Nozaki at the University of Tokyo Graduate School of Science used the world’s most powerful ultra-high voltage electron microscope to reveal the detailed 3D ultrastructure (nanoscale structure of the cell) of the thickly-walled cells of the genus Glaucocystis, belonging to the most primitive photosynthetic eukaryote group Glaucophyta

. This 3D ultrastructure shows that the whole cell membrane of the Glaucocystis cell is tightly backed by numerous leaflet-like flattened vesicles. The researchers speculate that the first plant cell might have exhibited a similar 3D ultrastructure when it was established by the chloroplast endosymbiosis.