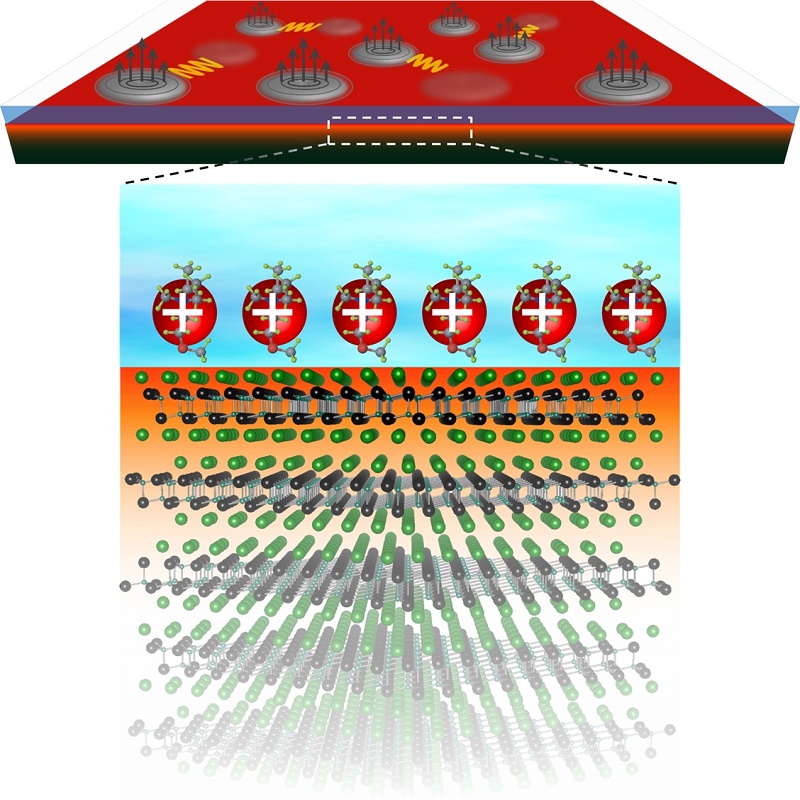 ZrNCl electric-double-layer transistor and vortex motion
The bottom figure shows the electric-double-layer transistor based on ZrNCl in which an electric field is applied on the surface. Cations in the ionic liquid arrange on the surface on the ZrNCl, and then conduction electrons are induced and confined at the surface having thickness of 1-2 layers (1-2 nanometers), in which superconductivity is realized. The top figure shows the vortex motion under the magnetic fields in that system. Even at very low temperatures, the vortices can move under magnetic fields due to quantum fluctuation, leading to the generation of finite electrical resistance and thus preventing the emergence of the superconducting state.
© 2015 Yu Saito.

Researchers at the University of Tokyo have demonstrated that an ideal 2D superconductor with minimal disorder cannot maintain its superconductivity under a magnetic field due to quantum fluctuation. This result provides important insights that will support research and development of materials for next generation nano-electronics.

Superconductors are being intensively investigated all over the world as ultramodern materials used in linear motor cars and nuclear magnetic resonance (NMR) spectrometers; in particular, superconducting nano-wires and thin films are attracting growing interest with the recent development of nano-electronics. Although superconducting thin films have been the subject of research since the 1970s, most research has focused on Bismuth and other deposited metallic thin films in the form of amorphous or crystal with many impurities and defects, which are inevitably disordered. Therefore, the intrinsic nature of ideal clean 2D superconductors with little disorder has yet to be clarified.

A research group headed by Professor Yoshihiro Iwasa (concurrently RIKEN research group leader) and doctoral student Yu Saito from the Department of Applied Physics and Quantum-Phase Electronics Center in the University of Tokyo, and Professor Tsutomu Nojima from the Institute for Materials Research at Tohoku University has prepared an atomically thin and clean 2D superconductor from an atomically-thin single crystalline ZrNCl film, prepared by the Scotch-tape method, and an ionic liquid, creating an electric double layer transistor with minimal disorder. ZrNCl is a kind of ceramic semiconductor and an atomic layered material. Moreover, by detailed investigation of the device’s transport properties under magnetic fields, the research group discovered that high quality clean 2D superconductors with minimal disorder cannot maintain the superconducting state, namely, a zero resistance state, under finite magnetic fields even at low temperatures due to quantum fluctuation, and instead show properties of a metallic state.

“Our findings will be the basis for further investigations of new properties such as broken inversion symmetry in electric-field-induced 2D superconductors, and are expected to lead to applications in nano-devices with micro-fabricated 2D superconductors.” says Professor Iwasa.

This research was published in the journal Science (ScienceXpress rapid electronic edition of Science) on 1 October 2015.