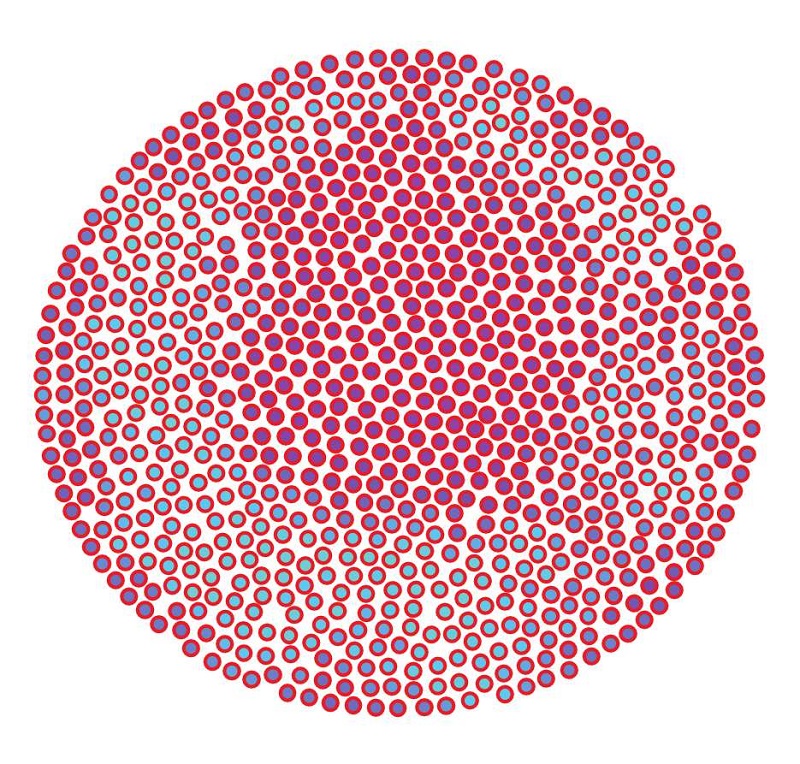 Liquid-solid coexistence in a rubber ball system
Coexistence of a disordered liquid phase (bright particles) and a solid phase with six-fold (hexagonal) order (dark particles). Observed at the area fraction of 0.74 and the dimensionless acceleration of 0.3.
© 2015 Yuta Komatsu, Hajime Tanaka.

Researchers at the University of Tokyo examining crystallization of granular matter typified by wheat flour or medicinal powders found that in contrast to elastic steel granules, inelastic rubber granules go through a stage in which liquid and solid phases coexist. Beyond statistical physics, this finding will benefit basic and applied research including in food and pharmaceutical sciences.

Grains of sand, rice, tablets and other powders (granular matter) are a familiar part of our daily lives. It requires the introduction of energy from outside in order to set a powder in motion. Powders include those composed of inelastic rubber particles that lose a significant portion of kinetic energy as heat when they collide, and those composed of elastic steel particles that do little. However, while powders exist in abundance in our environment, much remains unknown about the self-organization of powders composed of rubber particles.

The research group of Professor Hajime Tanaka at the Institute of Industrial Science and graduate student Yuta Komatsu at the Department of Applied Physics of the Graduate School of Engineering investigated the crystallization behavior of granular matter confined in two dimensions between two vertically vibrating plates with increasing its packing density. The researchers employed rubber and steel particles as models of inelastic and elastic particles, respectively. They found that the crystallization style of each differs greatly, with the rubber powder showing discontinuous crystallization, going through a stage in which both liquid and solid phases coexist. Further, in the stage where solid and liquid phases coexist, the liquid phase has a higher effective temperature to the solid phase.

“This research shows that loss of kinetic energy through collisions between particles has an important part to play in the self-organization of a powder set in motion by external introduction of energy,” says Professor Tanaka. He continues, “In addition, it is now clear that a steady state is formed in which both liquid and solid phases coexist, governed by conditions completely different to those of conventional thermal equilibrium.”

This research will contribute significantly to understanding the collective motion of granular matter and the self-organization of living matter into complex systems.