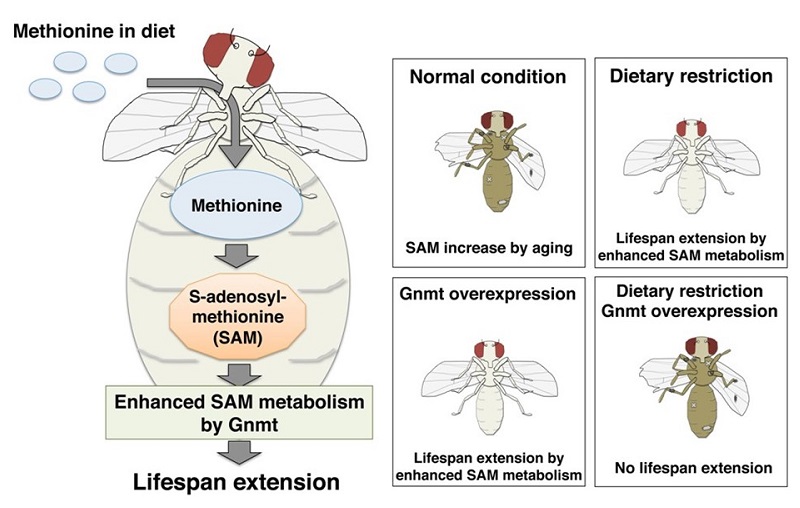 Effects of methionine metabolism on longevity
SAM is synthesized from methionine consumed as part of a healthy diet. GNMT is the enzyme that catabolizes excess SAM to maintain a constant level of the metabolite. GNMT activation enhances SAM metabolism and extends lifespan in Drosophila (fruit flies).
© 2015 Obata Fumiaki.

Calorie restriction (CR) can extend lifespan in various organisms including yeast, worms, flies, mice and humans. Recent evidence indicates that quality of diet, but not the total calories, is key to this prolongation. Particularly, restriction of methionine, an essential amino acid, has been suggested to be sufficient for lifespan extension. However, the detailed molecular mechanism behind this extension is not understood.

Project Assistant Professor Fumiaki Obata (current position: Researcher in the Francis Crick Institute, UK) and Professor Masayuki Miura in the Graduate School of Pharmaceutical Sciences, the University of Tokyo have revealed that the metabolism of S-adenosylmethionine (SAM), a metabolite synthesized from methionine, but not methionine itself, is a key factor for lifespan extension in fruit flies. They found that adipose tissue in fruit flies has the mechanism to maintain SAM level and identified the responsible metabolic enzyme (Glycine N-methyltransferase, GNMT). In addition, older flies have higher SAM levels than young flies. Genetically enhancing the activity of GNMT suppressed the age-dependent SAM increase and extended longevity. In addition, in flies deficient in GNMT the lifespan-extending effect of dietary restriction was abrogated, indicating that SAM metabolism is a key mediator for dietary restriction-dependent benefit.

“Since SAM metabolism is conserved in humans, this newly identified mechanism may find applications for healthy lifespan extension in our society,” says Project Assistant Professor Obata. He continues, “SAM has a proven track record as an anti-depressant and supplement for treating liver damage, but little is known about its mechanism of action. This should be the focus of future research.”