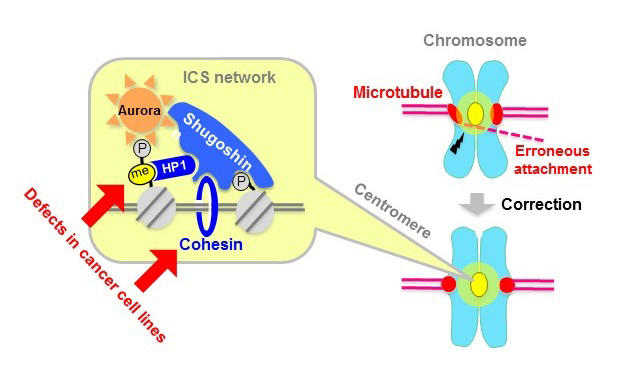 The ICS network regulates chromosome attachment
The ICS network is formed by recruiting the proteins shugoshin and Aurora-kinase to the centromeres of chromosomes. Aurora plays a role in correcting erroneous microtubule attachment. Cohesin and HP1 sustain the stability of this network by directly binding to shugoshin. These pathways are impaired in a number of cancer cell lines.
© 2015 Yoshinori Watanabe

University of Tokyo researchers have discovered a key molecular mechanism of chromosomal instability, a major feature of human solid tumors thought to be involved in the initiation of tumor formation. This discovery suggests a new direction for development of cancer drugs to treat solid tumors.

The cells that make up our bodies are constantly being replaced by cell division. Chromosomes in our cells are linked at a point called the centromere, and when a parent cell divides, microtubules attach to the centromere to pull each chromosome apart, distributing genetic information to each daughter cell. When this process of chromosome separation goes wrong it can lead to chromosomal instability, the gain or loss of part of the chromosome. Chromosomal instability is a common feature of human solid cancers that is thought to be involved in the initiation of solid tumors and promotion of tumor growth, making it a potential target for cancer therapies. However, although several mechanisms have been proposed for the emergence of chromosomal instability, the molecular mechanism behind it remains unknown.

Professor Yoshinori Watanabe and Assistant Professor Yuji Tanno’s group at the University of Tokyo’s Laboratory of Chromosome Dynamics in the Institute of Molecular and Cellular Biosciences focused on the inner centromere-shugoshin (ICS) network, a protein complex which is formed at the centromere, protects centromere cohesion and corrects erroneous microtubule attachment. Looking at a variety of different cancer cell lines, the group found that the ICS network was impaired in 12 of 14 cell lines showing chromosomal instability, but not in cells showing no instability. Importantly, they found that artificial restoration of the ICS network suppressed chromosomal instability in seven of nine cell lines.

“We found abnormalities in the ICS network in cancer cell lines derived from lung, colon, skin and bone tissues cancers,” says Professor Watanabe. He continues, “This network may be a common molecular mechanism by which human cells become cancerous, in which case this study provides a valuable clues for the development of drugs for suppressing cancer.”

Laboratory of Chromosome Dynamics, Institute of Molecular and Cellular Biosciences