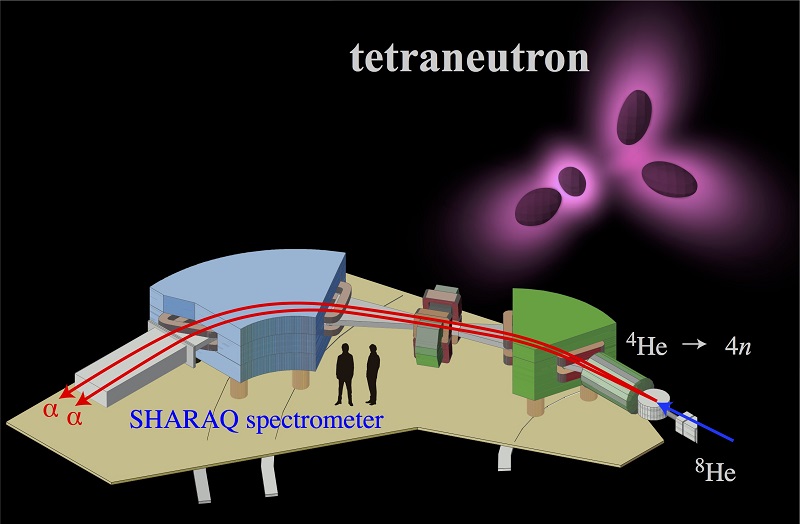 University of Tokyo and RIKEN researchers have found a tetraneutron nucleus composed of four neutrons alone, opening an avenue to research into neutron matter.

The atomic nucleus, which accounts for the majority of the mass of matter in the natural world, usually consists of a combination of protons and neutrons. Further, the number of protons and neutrons in stable nuclei that exist in nature are usually in balance. How far unbalanced atomic nuclei can be is closely related to the nature of the nuclear force that binds protons and neutrons. Among the various possible combinations, the question of whether the most extreme case of a nucleus composed of only neutrons exists is one of the most important issues in nuclear research both experimentally and theoretically. In fact, while it was known that a nucleus composed of two neutrons could not exist for long, it was not known whether an atomic nucleus of four neutrons could exist since there was no efficient experimental method for producing such nuclei.

Now, the research group of University of Tokyo Graduate School of Science Professor Susumu Shimoura, collaborating with researchers at RIKEN and other institutions, has for the first time discovered a tetraneutron resonance consisting only of four neutrons without any protons. The research group successfully produced the atomic nucleus consisting of four neutrons in a substantially stationary state in the laboratory. This result was made possible by pioneering a new experimental technique that uses a beam of unstable helium 8 (8He) atomic nuclei.

“Measurement of the neutron nuclei was performed using the RIKEN RI Beam Factory SHARAQ spectrometer,” says Professor Shimoura. He continues, “With this achievement we have paved the way to a firmer understanding of the structure of neutron stars composed of neutron matter.”