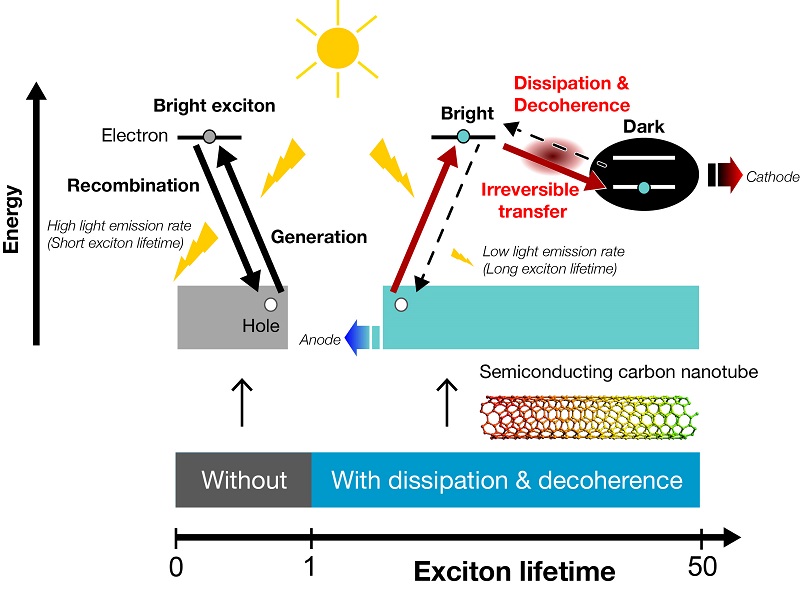 Energy dissipation and decoherence utilized for the better efficiency in photovoltaics
A small amount of energy dissipation associated with decoherence causes the exciton to irreversibly changes excitons into a “dark” state in which they cannot emit photons. In the case of a semiconductor carbon nanotube, this phenomenon results in a nearly 50-fold increase in exciton lifetime.
© 2016 Yasuhiro Yamada, Youhei Yamaji, and Masatoshi Imada.

Researchers at the University of Tokyo used numerical simulations to demonstrate that energy dissipation and decoherence, which were thought to reduce solar cell efficiency, are counterintuitively helpful for the development of more efficient photovoltaics, offering a new guide to finding efficient photovoltaic materials.

In solar cells, sunlight is converted to electricity, or, in quantum mechanical language, photons (quanta of light) to conducting electrons. Since both photons and electrons are stable elementary particles, quantum mediators have to be generated to connect them: the mediator is exciton, which is a bound pair of an electron and a hole of electron (created when an electron is lacking). In solar cells, excitons are generated when photons are absorbed, and electricity is then produced when they separate into electrons and holes at opposite electrodes.

In the above photovoltaic process, however, there is a trade-off in improving solar cell efficiency. On the one hand, while a high photon absorption rate is most welcome when generating excitons, on the other hand, this also means that conversion from exciton to photon is also enhanced. Disappointingly, greater absorption leads to greater recombination of excitons into photons and shorter exciton lifetime, which leads to lower separation rate because of light emission.

The research group of Project Researcher Yasuhiro Yamada and Professor Masatoshi Imada at the Department of Applied Physics, Graduate School of Engineering, and Project Lecturer Youhei Yamaji at the Graduate School of Engineering Quantum-phase Electronics Center, taking inspiration from the process of photosynthesis in plants, demonstrated theoretically using a semiconductor carbon nanotube as an example that energy dissipation and decoherence, thought to be factors reducing efficiency, are useful for increasing the probability that excitons will separate into electrons and holes. Energy dissipation and decoherence irreversibly change generated excitons into “dark” states in which they cannot emit photons, extending their lifetime and raising the probability that they will separate, generating current flow.

Substances in which such ‘dark states’ work show similar luminescence after photon absorption as those losing the absorbed energy completely through internal defects, and so were not considered solar cell candidates, However, the positive side of the ‘bad’ effects revealed by the current research sheds light on those materials that have so far been overlooked as solar cell candidates and provides a new guideline for exploring more efficient photovoltaic materials.

Yamada is currently at Osaka University, Graduate School of Science, Department of Physics.