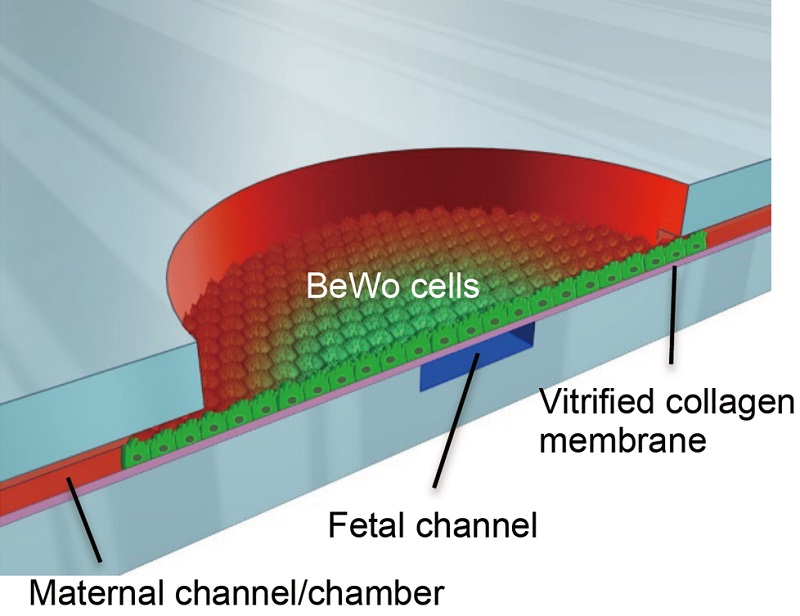 University of Tokyo researchers have fabricated a multi-layer microfluidic “organ-on-chip” device that mimics the structure of the human placental barrier that supports blood flow and exchange of material between the mother and fetus. Using this device, the group discovered that shear forces caused by fluid flow in the maternal body induce the formation of microvilli in placental epithelial cells.

The cells that make up our bodies are exposed to a variety of stimuli including fluid flow and extension, compression and twisting forces. It is thought that cells maintain cell and tissue function by adapting to their environment in response to such stimuli. The placental barrier, which transports oxygen and nutrients from the maternal blood to fetal blood, is one example of a tissue that has adapted to multiple stimuli. Placental barrier cells are constantly exposed to shear forces from the flow of maternal blood to the placenta. However, little research had been conducted on the effect of this flow on cell morphology and function.

The research group of Professor S. Takeuchi and (then) Dr. S. Miura at the University of Tokyo’s Institute of Industrial Science observed that application of fluid flow shear force to placental barrier cells results in the formation of characteristic microvilli on placental epithelial cells and additionally discovered that the glucose transport rate of the protein GLUT1 localized to the microvilli also increased. This has demonstrated that compared to conventional static culture methods in which forces such as that produced by fluid flow are not applied, the application of shear force due to fluid flow induces the formation of microvilli and controls cell function. Further, the group discovered that activation of the calcium ion channel TRPV6 by fluid shear force induces microvilli formation.

“The use of microfluidic device technology made possible this discovery that shear force is important for microvilli formation,” says Professor Takeuchi. This discovery of the dynamic response characteristics of epithelial cells will contribute to furthering mechanobiological research.

This research was published in the journal Nature Communications. This research is a part of the ERATO “Takeuchi Biohybrid Innovation Project” funded by the Japan Science and Technology Agency.