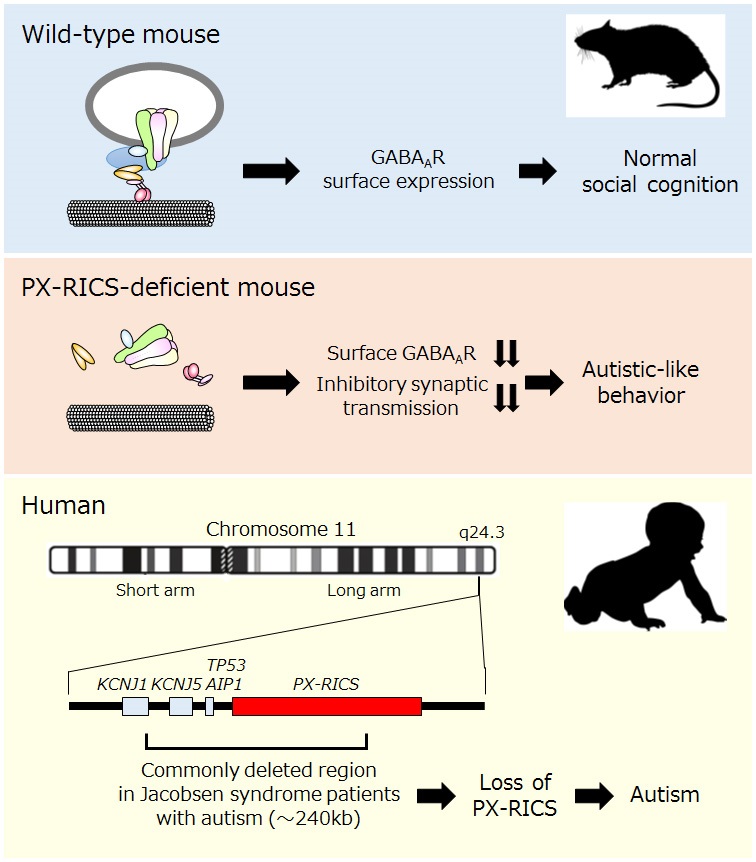 Pathogenetic mechanism of autism elucidated in this study
In normal wild-type mice, GABAA receptors are transported to and expressed on the neuronal surface by the trafficking mechanism involving PX-RICS, and no social behavioral disorder is seen. Mice lacking PX-RICS show a decrease in GABAA receptor expression on the neuronal surface, resulting in social cognitive disorder and autistic-like behavioral impairments. In humans, Jacobsen syndrome patients with autism share the loss of four genes on chromosome 11, including PX-RICS.
© 2016 Tsutomu Nakamura.

Researchers at the University of Tokyo have demonstrated that PX-RICS, a transport protein for GABA receptors which suppress neural activity, is responsible for autism found in Jacobsen syndrome patients. This finding provides novel therapeutic targets for the discovery of anti-autism drugs.

Autism is a common neurodevelopmental condition with high prevalence (one out of every 80-100 people), characterized by a triad of behavioral deficits: impairment in social interaction, difficulty with verbal and non-verbal communication, and restricted interests. It is believed that autism arises from congenital dysfunction of the areas of the brain responsible for social cognition, including the ability to understand and empathize with others. However, the detailed pathogenetic mechanisms remain to be elucidated.

The research group of Lecturer Tsutomu Nakamura and Professor Tetsu Akiyama at the University of Tokyo Institute of Molecular and Cellular Biosciences previously identified the protein PX-RICS that is predominantly expressed in the cerebral cortex, hippocampus, amygdala and other brain regions related to cognitive function, and generated mice lacking the PX-RICS gene. These mice were surprisingly normal in appearance. However, in this latest study the research group conducted behavioral analyses of the mice, and found that they exhibited a variety of autistic-like behavioral abnormalities: less interest in or avoidance of social interaction with other mice, less use of ultrasonic communication with other mice or in mother-pup communication, increased repetitive behavior, and a tendency to adhere to a previously established habits. Importantly, they identified that the PX-RICS gene is responsible for autism found in more than half of patients with Jacobsen syndrome, a congenital disorder caused by a terminal deletion of the long arm of chromosome 11.

“The protein PX-RICS is found abundantly in neurons in the cerebral cortex and other parts of the brain, where it transports GABA receptors, which suppress brain activity, to the cell surface,” says Lecturer Nakamura. He continues, “Now, we have shown that the transport of GABA receptors is involved with the onset of autism. This transport mechanism provides promising molecular targets for the discovery of novel anti-autism drugs, and may contribute to the discovery of new treatment strategies for autism.”