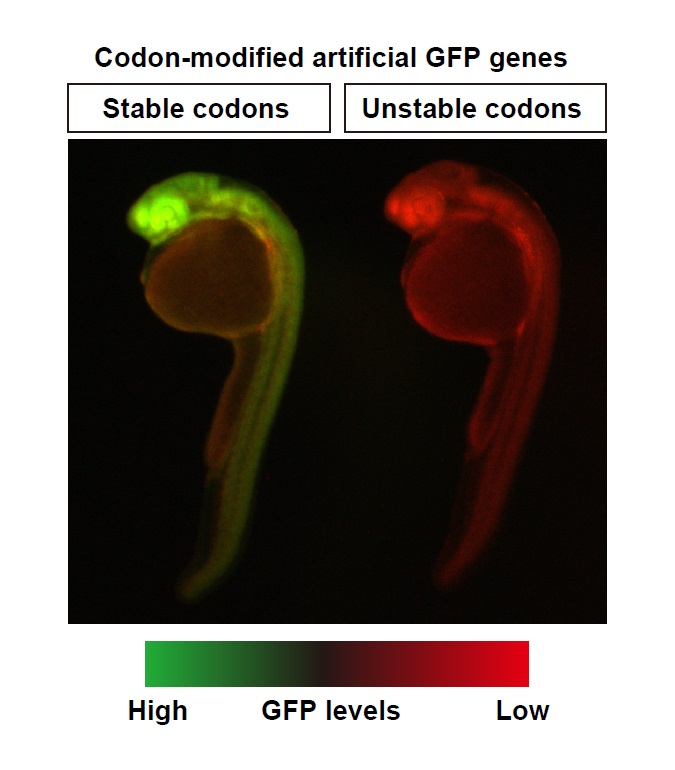 Researchers at the University of Tokyo have demonstrated that “codons,” the units of the genetic code that specifies the sequence of amino acids in proteins, also determine the stability of maternally derived messenger RNA (mRNA) in fertilized eggs. This discovery has revealed a previously unknown function of the genetic code and its importance in animal development.

In animals, mRNAs derived from the maternal genome (maternal mRNAs) are stored in fertilized eggs and act as templates to produce numerous proteins that support biological activities immediately after fertilization. Subsequently, a part of maternal mRNAs is rapidly erased and replaced with newly synthesized mRNAs that are transcribed from the embryonic genome. The principle that regulates the clearance of maternal mRNAs during this period in animal development, however, was not fully understood.

Assistant Professor Yuichiro Mishima and Professor Yukihide Tomari at the University of Tokyo Institute of Molecular and Cellular Biosciences studied factors that determine the stability of maternal mRNAs in fertilized eggs of small tropical fish, zebrafish. The researchers distinguished stable and unstable maternal mRNAs using the RNA sequencing method, and carefully compared their characteristics using informatics. As a result, they noticed a bias in the composition of codons between stable and unstable maternal mRNAs. The researchers then synthesized artificial genes with modified codon composition, and experimentally proved that codon composition affects the degradation rate of mRNAs.

“This discovery indicates a novel function of codons as a regulator of mRNA stability, in addition to its canonical function as a genetic code to direct amino acid sequences of proteins,” says Assistant Professor Mishima. He continues,“The importance of this novel function of codons, which was also reported in yeast recently, has now been shown for the first time in fertilized eggs. This study will advance our understanding about the mechanisms of gene expression in animal development.”

Laboratory of RNA Function, Institute of Molecular and Cellular Biosciences