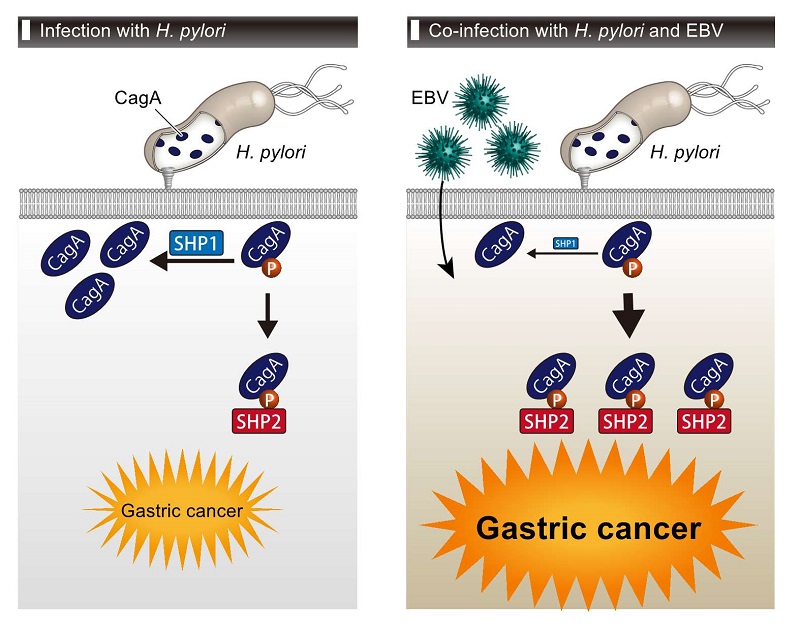 A University of Tokyo research group found that the enzyme SHP1 is the long-sought protein tyrosine phosphatase that inactivates the oncogenic (cancer inducing) potential of the CagA protein produced by the bacteria Helicobacter pylori. They also found that infection of gastric epithelial cells with Epstein-Barr virus (EBV) induces epigenetic silencing of SHP1 expression and thereby enhances the oncogenic potential of H. pylori CagA.

Most if not all human gastric cancers are caused by chronic infection of the stomach lining with H. pylori strains that possess the cagA gene. The H. pylori cagA gene-encoded CagA protein is delivered into gastric epithelial cells, where it undergoes tyrosine phosphorylation to exert its oncogenic action. In addition to cagA-positive H. pylori, approximately 10% of gastric cancer cases also harbor EBV in the cancer cells. However, the role of co-infection with H. pylori and EBV on gastric carcinogenesis has remained unknown.

In the present study, the research group of Professor Masanori Hatakeyama and Lecturer Naoko Murata-Kamiya identified SHP1 as a tyrosine phosphatase that dephosphorylates H. pylori CagA in gastric epithelial cells. Since the oncogenic activity of CagA is abolished upon tyrosine dephosphorylation of CagA, SHP1 is the tyrosine phosphatase that counteracts the development of gastric cancer by cagA-positive H. pylori. Infection of gastric epithelial cells with EBV induced suppression of SHP1 expression, which augmented the oncogenic action of H. pylori CagA.

"This work elucidated for the first time a pathophysiological collaboration between the H. pylori bacterium and the Epstein-Barr virus cooperate in promoting the development of human cancer," says Professor Hatakeyama. He continues, “we hope that the present study will pave the way for the development of effective prevention of gastric cancer.”