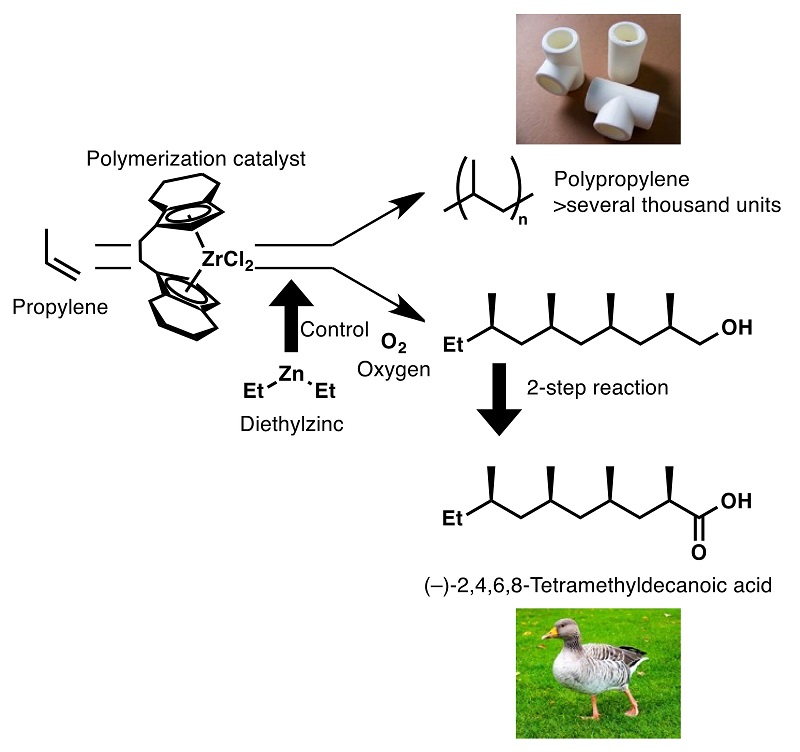 Synthesis of deoxypropionate motif by using polymerization catalyst
Oligopropylene, the precursor of the target compound, can be obtained in one step by employing a zirconium catalyst commonly used in propylene polymerization. The target compound, a major component of a wax secreted by graylag geese, was synthesized in three steps by conversion of the obtained oligopropylene.
© 2016 Kyoko Nozaki.

University of Tokyo researchers have demonstrated the 3-step synthesis of a natural product whose preparation conventionally required at least 10 steps by employing an olefin polymerization catalyst. This result potentially enables the facile syntheses of other natural products with the same substructure.

Polypropylene, a polymer that is widely used in general purpose plastics, is composed by the synthesis of highly efficient carbon-carbon bond formation. If it were possible to apply a polymerization catalyst capable of combining multiple propylene to the synthesis of natural products, it might be possible to shorten the synthetic process of compounds containing propylene units chained together.

The research group led by Professor Kyoko Nozaki at the University of Tokyo Graduate School of Engineering Department of Chemistry and Biotechnology focused on (–)-2,4,6,8-tetramethyldecanoic acid, a carboxylic acid containing four propylene units in a chain. This compound is a component of a wax secreted by graylag geese and has a substructure of four propylene units, so the overall synthetic route could be shortened if this substructure could be synthesized in one step.

The research group used zirconocene as a polymerization catalyst, and diethyl zinc as an additive, to link together propylene units and found the conditions under which chain length was limited to up to 20 units. The propylene tetramer, which is the substructure of the target compound, was isolated and further transformed in two steps to afford (–)-2,4,6,8-tetramethyldecanoic acid in just three steps.

The Nozaki Group, Department of Chemistry and Biotechnology, Graduate School of Engineering