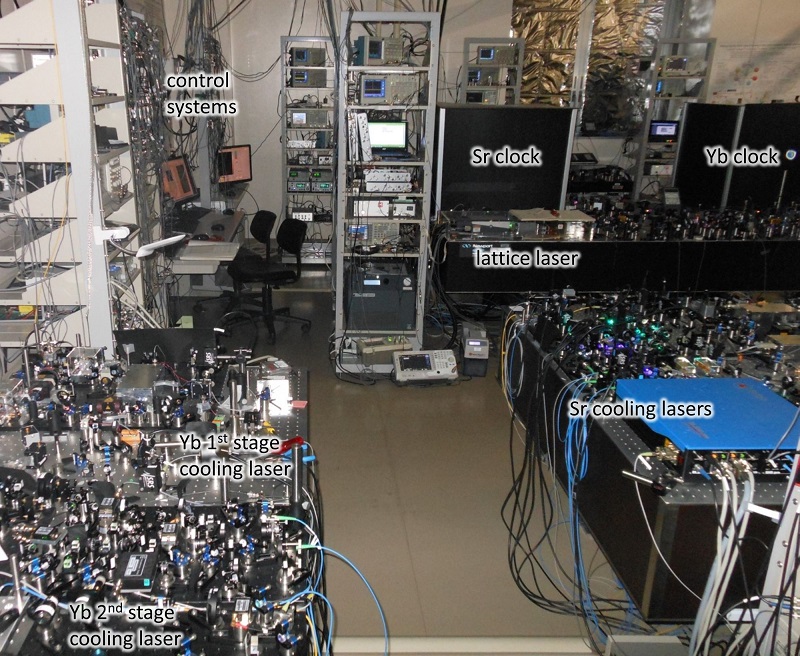 A look into RIKEN’s lattice clock laboratory
Various laser systems provide the light required to trap and cool ytterbium and strontium atoms, which is delivered to the clocks visible in the background by optical fibers. Computer systems time the application of laser pulses and control the clock laser frequencies.
© 2016 Hidetoshi Katori.

A University of Tokyo and RIKEN research group has demonstrated the high precision comparison of two optical lattice clocks working with the elements ytterbium (Yb) and strontium (Sr) that sets a new record in accuracy and measurement time.

Optical clocks presently allow the most accurate frequency measurements of any such device, and are in development as the next generation of atomic clocks in laboratories all over the world. The accuracy of such clocks has reached a point where comparing clocks becomes a challenge in itself.

The research group, led by Graduate School of Engineering Professor Hidetoshi Katori (Chief Scientist, RIKEN), reports the results of comparing the frequencies of two optical lattice clocks using ytterbium and strontium atoms. The research group determined the frequency ratio with an uncertainty of less than 5 parts in 1017, surpassing the limit set by the implementation of the “Système international d'unités”(SI) second itself, and improving on the record uncertainty for a comparison between clocks based on different atoms. In addition, improved stability reduced the measurement time required to reach this uncertainty level to less than 150 seconds, a reduction by a factor of 90 over previous comparisons of mercury and aluminum single-ion clocks.

“With such ultra-precise comparisons of different atomic systems, in addition to functioning as highly precise clocks, these devices will act as highly sensitive detectors that may open new windows of science onto the physical world,” says Professor Katori. He continues, “Such measurements will allow investigation of the constancy of fundamental physical constants and new physics beyond the Standard Model.”