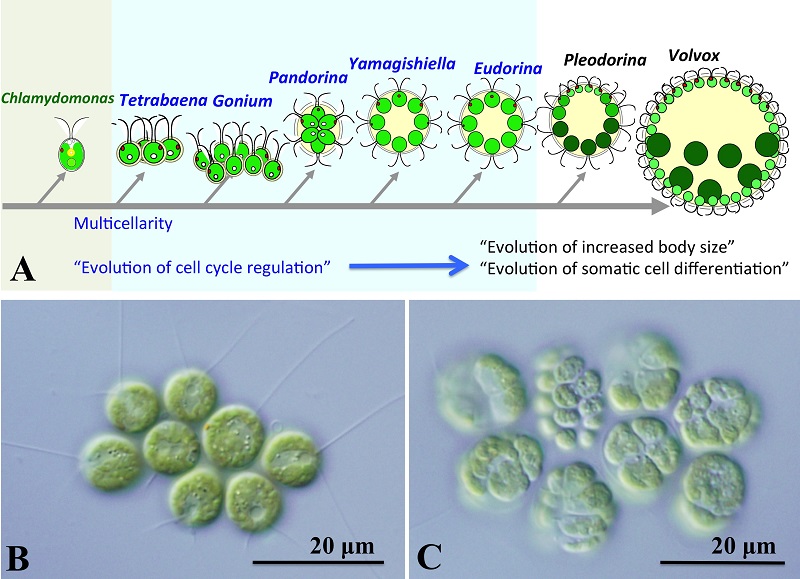 The colonial Volvocales, a model lineage for studies of multicellularity, and the primitive multicellular organism Gonium
A. Multicellarity in the colonial Volvocales. A Chlamydomonas-like unicellular ancestor might have become multicellular about 200 million years ago, giving rise to the complex multicellular organisms with differentiation of cell functions such as Pleodorina and Volvox. Gonium here studied has primitive 8- or 16-cell body without cellular differentiation. B. Eight-celled body of Gonium pectorale, Eight biflagellate cells of the same size are arranged in four rows of two cells each, and swim in an organized fashion. C. Reproduction of G. pectorale. Each cell divides successively to form the next generation organism.
© 2016 Hisayoshi Nozaki. Photo credit: Hisayoshi Nozaki.

Researchers at the University of Tokyo have demonstrated that a group of cancer-suppressing genes are key to the evolutionary step from single cell to multicellular organisms. This was revealed by whole genome sequencing of Gonium (Gonium pectorale), a primitive member of the Volvocales order of multicellular algae.

Associate Professor Hisayoshi Nozaki at the University of Tokyo Graduate School of Science and an international research group have constructed the whole genome sequence of the primitive multicellular organism Gonium pectorale, which they then compared with the genome data from its unicellular relative Chlamydomonas reinhardtii and the multicellular complex volvocalean species Volvox carteri in which the differentiation of cell functions is prominent, and demonstrated that a cell cycle-regulating gene identical to a human cancer-suppressing gene is key to the evolution of multicellularity. The international group also suggested that the evolution of cell-cycle genes might have occurred in the initial stage of multicellularity, preceding the evolution of genes for the differentiation of cellular functions.