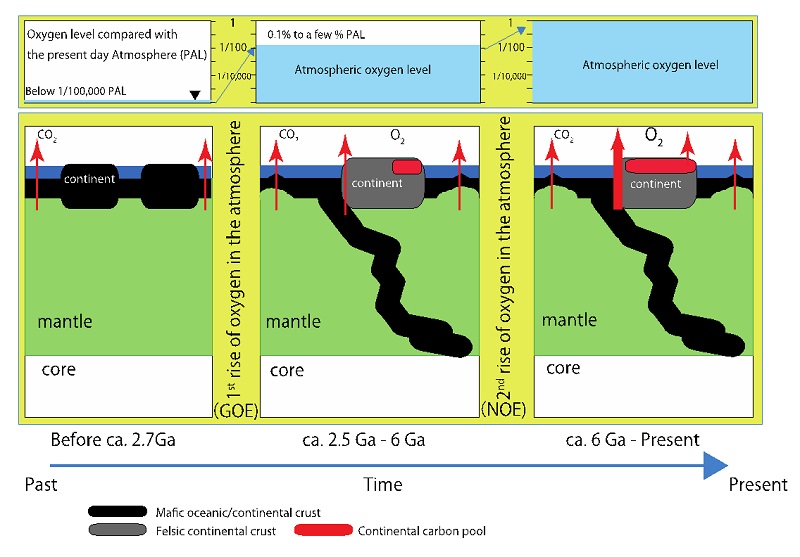 Schematic of the two stage rise in oxygen levels in the atmosphere and continental evolution via plate tectonics
The first increase in oxygen levels around 2.5 Ga ago occurred several hundred million years after photosynthetic life appeared on the Earth and the initiation of current plate tectonics created an environment poor in oxygen-capturing substances. The second rise occurred due to increased carbon reservoirs as a result of continental growth.
© 2016 Yusuke Yokoyama.

An international research group including researchers from the University of Tokyo has revealed that current high concentrations of atmospheric oxygen, known to have come about through two periods of increase, are closely linked to continental formation.

Today’s Earth, from the atmosphere to the depths of the oceans, is rich in oxygen. This is in stark contrast to the other planets of our solar system, and is considered an essential condition for the survival of higher organisms, including humans. Previous research has outlined the manner in which the Earth’s primitive and chemically reductive atmosphere completely lacking in oxygen evolved into the current oxygen rich environment. These studies have shown that the atmospheric oxygen rise to current levels occurred through a two-step process. The first step occurred between 2.5 to 2.0 Ga (billion years) ago and the second rise between 7 to 5 Ga ago. However, while there are several theories as to the causes and mechanisms of these two increases and the reason for the two specific periods of increase in oxygen concentration, this remains a major mystery in Earth and planetary science.

The international research group of Professor Yusuke Yokoyama and Project Researcher Kazumi Ozaki at the Atmosphere and Ocean Research Institute examined the mineral zircon (ZrSiO4). Further, the research group employed numerical modeling to suggest that the steadily increasing formation of continental carbon reservoirs after continental growth may have triggered a second rise in oxygen concentrations.

“This result clearly demonstrates a close relationship between two characteristics of the Earth: high atmospheric oxygen concentrations and plate tectonics,” says Yokoyama. He continues, “Atmospheric evolution over geological time spans is closely related to changes in the solid Earth. Increased oxygen concentration, and the second rise in particular, is a phenomenon that occurred as a result of changes in long term carbon cycles caused by continental growth.”

This research was carried out in collaboration with Rice University and Yale University in the United States.