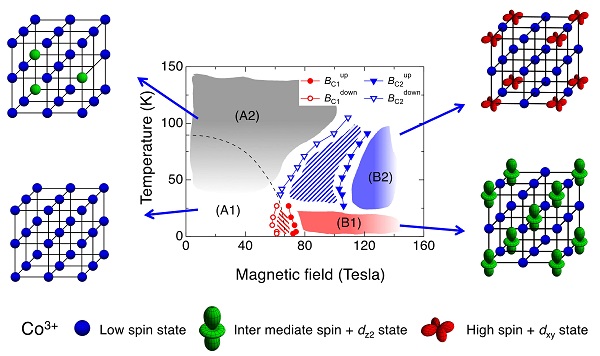 Magnetic field and temperature phase diagram of LaCoO3 clarified up to over 100 T, and the expected spatial pattern of the spin state ordering.
At the low temperature and low magnetic field (bottom left), all cobalt ions are in the low spin (LS) state. With increasing temperature, intermediate spin (IS) or high spin (HS) states are randomly occupied (top left). By applying the strong magnetic field over 100 T, the occupation number of IS and HS states increases and are expected to become spatially ordered (top right). It is also expected that the orbital states accompanying the IS or HS states are also spatially ordered. With decreasing temperature, another spatial order of spin states and orbital states is expected to emerge (bottom right).
© 2016 Akihiko Ikeda.

A University of Tokyo research group, using world-class ultrahigh magnetic fields, has discovered a novel electronic and magnetic “spin state ordered phase” of cobalt oxide. This discovery provides profound insights into the properties of the cobalt oxides and may stimulate the development of micro-devices such as switches.

In the oxides of the transition metals such as cobalt, electrons are able to show a plurality of states (i.e. they have multiple degrees of freedom): they can have either positive or negative charge, and their spin can be up or down. These degrees of freedom are strongly correlated with each other, causing transition metal oxides to exhibit a variety of properties and consequently making them the focus of research interest. Cobalt oxide has a unique degree of freedom called “spin state,” but in many cases how it collectively behaves in solids has not been clear. This is one of the biggest challenges facing solid-state physics, and one which researchers have been trying to solve for over half a century.

The research group of Research Associate Akihiko Ikeda and Associate Professor Yasuhiro H. Matsuda at the University of Tokyo Institute for Solid State Physics (ISSP) and Associate Professor Keisuke Sato at the National Institute of Technology, Ibaraki College discovered that the spin state was present in cobalt oxide at the high magnetic field region and spatially aligned with the spin state ordered phase. This discovery was made using the ultra-high magnetic field generator at the ISSP that is capable of generating the world’s most powerful class of magnetic fields of over 100 Tesla, more than one hundred times more powerful than the magnetic fields of the world’s strongest permanent Neodymium magnets.

“Measurements in frontier regions are exciting because you may encounter important discoveries even for materials that are thought to be well-known. At the beginning, I could not get interesting data no matter how I conducted the measurements. Then one day, I came up with an idea of increasing the temperature of the sample, even though more often than not new and interesting phenomena appear with decreasing the temperature,” says Ikeda. He continues, “That was how I found the new magnetic field induced phase transition that had been concealed for over half a century. Next, I am looking forward to further clarifying the properties of the newly found spin state ordered phase by trying further cutting edge measurement techniques.”

The present study was published online on June 6, 2016 in the scientific journal Physical Review B (Rapid Communication) and has been selected by the journal as an “Editors’ Suggestion.”