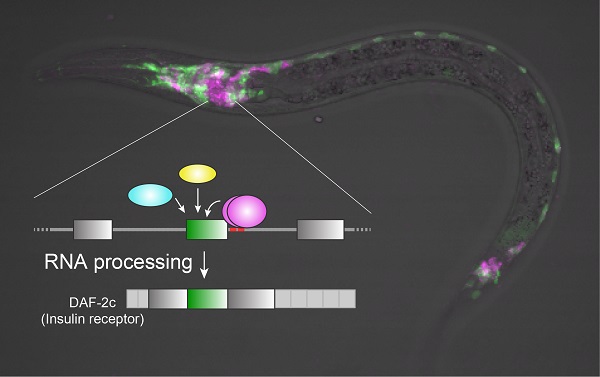 Mechanism by which DAF-2c is produced in specific neurons


A transgenic worm for monitoring DAF-2c production by using fluorescent proteins. DAF-2c is produced in neurons in magenta and not in those in green. The DAF-2c production is regulated at the level of RNA processing.

Researchers at the University of Tokyo have demonstrated that production of a specific type of insulin receptor is required for gustatory memory during starvation in worms. The finding provides evidence that learning ability is influenced by functional diversity of a single gene in a single neuron.

C. elegans, a tiny roundworm that lives in soil, can remember concentrations of salts (NaCl etc.) to which it has been exposed during feeding or food deprivation and learn to approach or avoid those salt concentrations. The research group previously found that an insulin receptor, which is known to regulate blood glucose levels in humans, acts in a gustatory neuron that senses external salt concentrations in this learned behavior.

Here, the research group of Assistant Professor Masahiro Tomioka and Professor Yuichi Iino at the University of Tokyo Graduate School of Science found that DAF-2c was produced only in a restricted subset of neurons, including the gustatory neuron. C. elegans has a compact nervous system, which consists of only 302 neurons, and the individual neurons play indispensable roles in behavioral and physiological functions. The research group unveiled the molecular mechanism by which the RNA processing pattern was switched and, as a result, DAF-2c was produced only in the restricted group of neurons. They further demonstrated that this mechanism underlies the learned salt avoidance under starvation conditions.

This research was carried out in collaboration with Dr. Hidehito Kuroyanagi of Medical Research Institute, Tokyo Medical and Dental University, Tokyo, Japan.