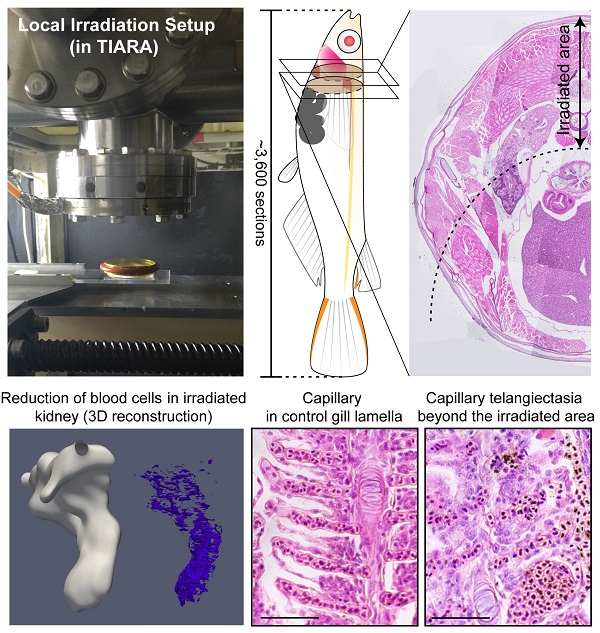 Local heavy particle beam irradiation and analysis
(Top left) After irradiation with a heavy particle beam in a device that can irradiate the body, the whole body of the medaka is cut into serial sections. (Bottom left) 3D re-construction of the kidney showed blood cell reduction in the irradiated area. Capillary enlargement and bleeding were also observed.
© 2016 Tomomi Watanabe-Asaka.

A University of Tokyo joint research group has developed a method of applying a heavy particle beam (a beam of accelerated carbon ions) used in cancer radiotherapy to the whole body of a medaka (killifish) and then creating serial slices of the whole body to identify changes induced in the whole body at a cellular level. These results are an important contribution to assessing local impact of radiotherapy treatments for cancer.

One issue that had long been a matter of concern is the effect of irradiation localized to one area of the body on other parts that are not directly irradiated. Mainstream conventional research methods to investigate such effects involve excising and analyzing individually the tissues of interest, while whole body evaluations have not been possible.

The group of Project Researcher Tomomi Asaka, Associate Professor Shoji Oda and Professor Hiroshi Mitani at the University of Tokyo Graduate School of Frontier Sciences, Department of Integrated Biosciences, working with the Takasaki Advanced Radiation Research Institute National Institutes for Quantum and Radiological Science and Technology (QST-Takasaki), Kitasato University and Yamaguchi University, used the QST-Takasaki Takasaki Ion Accelerators for Advanced Radiation Application (TIARA) to irradiate a localized area of the body of a Japanese medaka, a vertebrate just like humans but easy to analyze due to its smaller body size, and then sliced the entire medaka body into serial sections for analysis to reveal the impact of localized irradiation on the whole body. This novel method showed that dilation of and bleeding from capillaries occurred even in tissues that the radiation did not reach. Further, creating a three-dimensional reconstruction of the tissue of the partially irradiated kidney, the group discovered that irradiation also affected the blood vessels of tissue that was not irradiated.

The research group developed a method of irradiating anaesthetized medaka from both the ventral and dorsal sides with the heavy particle beam created by the TIARA cyclotron while precisely controlling the energy of the beam so that it only penetrated up to 2 mm from the body surface. Each medaka was then sliced into 3,600 slices each of just 5 micrometers thickness so that the entire body of the fish could be observed at the cellular level.

“Heavy particle beams are often used in cancer treatment of late because in comparison with X-rays or gamma-rays they have a strong effect on cells and allow more accurate and localized irradiation,” says Mitani. He continues, “This study is a major step forward in the field of basic research for cancer treatment.”

“Next, I hope to elucidate the inflammatory mechanism that brings about capillary bleeding in medaka,” says Asaka concerning her future research plans.

Yamaguchi University has released the images of a medaka from this research online.