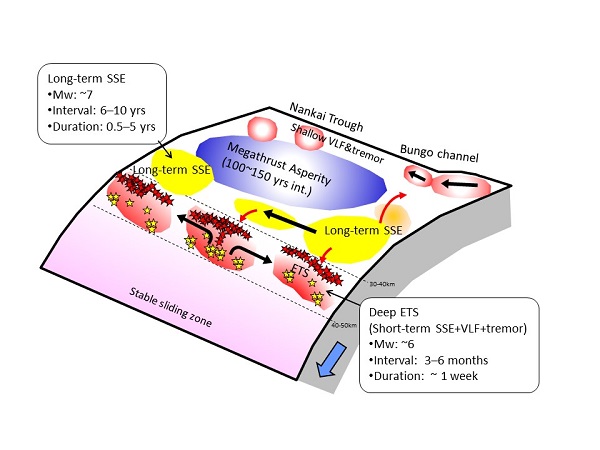 A research team at the University of Tokyo has assessed the connection between slow earthquakes and huge megathrust earthquakes that occur at plate boundaries shared by the two types of quakes. The team has evaluated three functions that slow earthquakes may serve in relation to giant quakes by reviewing aggregate studies in the nascent research area of slow earthquakes. Careful and precise monitoring of slow earthquakes, characterized by the slow slip behavior of geological faults compared to traditional quakes, holds promise of providing a new perspective in predicting the occurrence of huge earthquakes.

The research team of Professor Kazushige Obara and Associate Professor Aitaro Kato at the Earthquake Research Institute of the University of Tokyo reviewed comprehensive research data on slow earthquakes occurring in nearly the previous two decades, and presented three possible roles they can play in connection to huge earthquakes.

The first is as useful analogs of megathrust earthquakes, as slow earthquakes occur frequently and their behavior is similar to that of huge quakes; the second is as stress meters because of their high sensitivity to stress changes in the megathrust seismogenic zone, which may be observed through changes in slow-earthquake behavior; and the third is as agents of stress transfer whereby force from the slow quakes is loaded on to adjacent megathrust source faults, thereby increasing the probability of rupturing the fault areas.

The researchers hope to contribute to the understanding of the events leading to huge earthquakes with their general introduction outlining the research on slow earthquakes so far, and through continued monitoring of the quakes’ behavior.