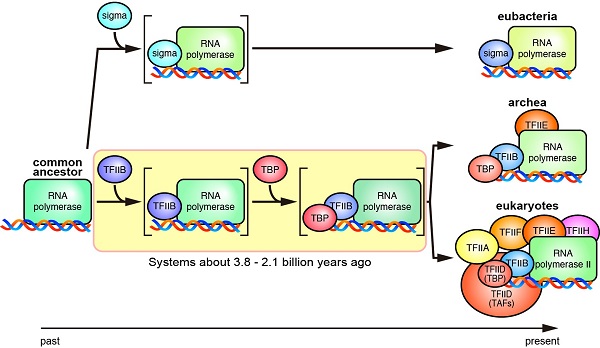 Ancient and present transcription systems
Transcription systems of ancient organisms of nearly 3 billion years ago were different from those of existing archaea and eukaryotes.
© 2016 Laboratory of Developmental Biology, Institute of Molecular and Cellular Biosciences, The University of Tokyo.

Researchers at the University of Tokyo and their collaborators have revealed genetic transcription systems from about 3 billion years ago using a new evolutionary indicator they developed for analyzing evolutionary distances between ancient and present genes. The current outcome sheds light on ancient transcription systems, which until now had been considered impossible to analyze because the DNA of ancient organisms no longer exist, and the new analysis method promises to advance molecular evolution research.

In the study of evolution, fossils are often used to estimate the dates when organisms diverged from their common ancestors. In the field of molecular evolution, scientists study and compare gene and protein sequences in organisms’ molecules, and speculate when the organisms branched out from their common ancestors. However, these methods have their drawbacks, namely: 1) We cannot obtain genes of ancient organisms; 2) we cannot measure the evolutionary distances between ancient organisms and their offspring; and 3) when we try to group genes into families based on the genetic material of present offspring, a part of the family’s genes has to be set aside as an outer group and excluded from analysis; as a result, the evolutionary process of the whole gene family can never be determined, giving rise to the need for a new approach.

Associate Professor Masami Horikoshi of the Institute of Molecular and Cellular Biosciences at the University of Tokyo and his collaborators at the High Energy Accelerator Research Organization focused on duplicated domains that repeat themselves within a gene and developed a new analytical method that does not require an outer group to calculate the evolutionary distance between the present offspring genes and their ancestors. The researchers studied molecules involved in the transcription—or transfer of genetic information from DNA to messenger RNA—using the newly defined evolutionary indicator and found that transcription systems of ancient organisms of nearly 3 billion years ago were different from those of existing archaea and eukaryotes.

As the DNA of primeval organisms no longer remain, molecular evolutionary analysis was thought to have come to a standstill. The researchers succeeded in introducing a new and solid approach for the first time to solve a problem in molecular evolution that remained unsolved for 55 years, providing findings on the evolution of transcription systems that are much more accurate than estimations rendered so far through other methods.

The development of a quantitative measurement of molecular evolution offers not only broader and more detailed insights into the evolutionary process of life systems that support cell proliferation and differentiation, but also sheds light on the transformation of the evolutionary mechanism underlying sophisticated biological systems, thereby pointing to the potential application of this knowledge in various fields.

“Thirty years have passed since I first took an interest in tackling the mystery surrounding the origin of ancient transcription systems,” says Horikoshi. He continues, “I was able to figure out the mechanism of the transcription systems from several billion years ago, by always being cognizant of the challenges posed by difficult problems and keeping to my research.”