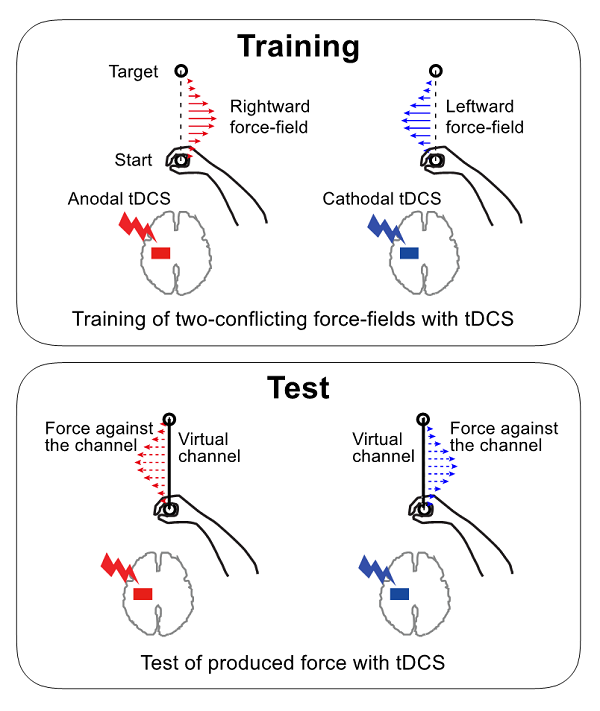 Motor memories are encoded and retrieved according to the brain state.
Through repetition, a participant trains his arm movement to adapt to the rightward or leftward force field associated with contrasting tDCS polarity (top). After a sufficient amount of training, the force associated with polarity is automatically elicited when tDCS is applied (bottom).
© 2016 Daichi Nozaki.

University of Tokyo researchers have demonstrated that motor memories tied to specific motor skills are formed according to the state of the brain at the time of learning those skills. The current findings could eventually lead to applications for methods of training motor skills that utilize manipulating the brain state—particularly more efficient training methods for athletes, and rehabilitation and physical therapy for sufferers of motor paralysis.

Our memory is strongly influenced by the context of the situation when we form our memory, or recall something from it. For instance, memories associated with a particular place often come to life when we revisit that spot, even after a long absence. Recent studies have shown that such “tagging” of memory also exists in memories of motor skills: For example, separate motor memories are created for the same arm motion, depending on whether the opposite arm is moving or not; but little is known about how such tagging of motor memories is implemented in the brain.

The research team led by Professor Daichi Nozaki of the University of Tokyo’s Graduate School of Education tested the hypothesis that if the state of the brain varies according to the specific motor skills being learned, it would follow that different motor memories are created for varying brain states. The team stimulated noninvasively the area of the brain called the primary motor cortex, involved in the formation of motor memories; the researchers placed electrodes on test participants’ scalps and applied electric currents of contrasting polarity (anodal and cathodal) with a technique called tDCS (transcranial direct current stimulation) to create two different brain states. The participants were instructed to hold a robotic handle and push it directly forward from a home position, while the researchers made the task more difficult by applying rightward or leftward force on the handle—making it necessary for the subjects to undergo some special skills training. To tag motor memories while the participants carried on with their training, the scientists switched the polarity—either anodal or cathodal—applied through tDCS, depending on whether rightward or leftward force was being administered. When the participants acquired adequate motor skills after a sufficient amount of training, they performed the forward straight arm movement they had been training, while researchers recreated the same brain states as those during training by administering tDCS polarity. Surprisingly, the participants moved the handle in the direction to counteract the force they experienced during their training, according to the corresponding tDCS polarity-induced brain state, even if no actual force was being applied—for instance, if anodal tDCS polarity was administered during training when a force field pushing the handle rightward was applied, the subjects tended to move the handle toward the left, indicating they were automatically recalling the motor memory linked to that tDCS polarity, or brain state.

“Although the data we gathered were consistent with our hypothesis, I was still very surprised to see that different motor memories were recalled according to the tDCS polarity,” says Nozaki. He continues, “We will make the best effort to establish a practical skills training method through manipulating the brain state.”

The Nozaki Laboratory, Division of Physical and Health Education, Graduate School of Education