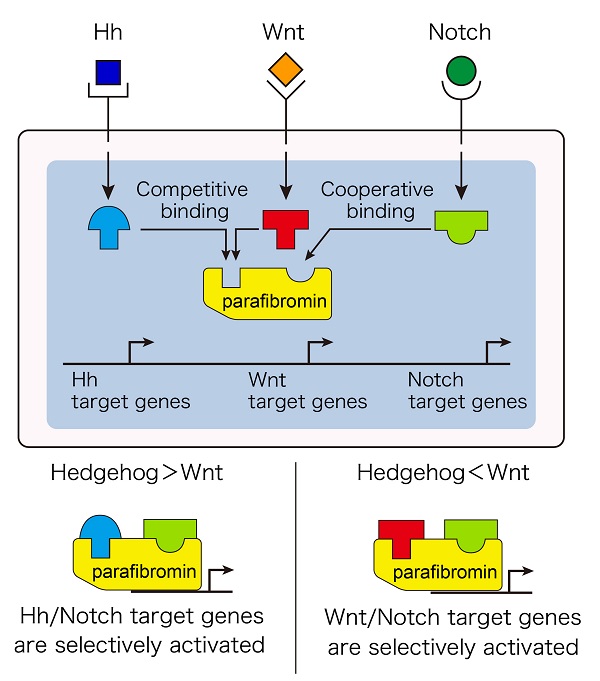 Researchers at the University of Tokyo found that a protein called parafibromin acts like a computer logic board within the cell by integrating and converting multiple disparate signals from the outside into appropriate responses. This finding paves the way for the development of innovative therapeutics and preventive measures against cancer, congenital developmental diseases, and other conditions caused by the faulty integration of signals within the cell.

A variety of extracellular stimuli trigger a succession of signals transmitted along pathways within the cell, eventually giving rise to appropriate cellular responses such as cell proliferation and cell death. In multicellular organisms, morphogen signaling pathways, which help determine the structure and location of tissues and other materials, mediate communication between cells, thereby playing essential roles in embryonic development and maintaining internal stability, known as homeostasis, of adult tissues. However, very little is known about the mechanism through which a single cell perceives and integrates signals simultaneously activated in response to two or more distinct morphogens, the chemicals involved in cell development during tissue formation and differentiation, so as to generate appropriate transcriptional output and adequate cellular responses.

In the present study, the research group led by Professor Masanori Hatakeyama and Project Researcher Ippei Kikuchi at the University of Tokyo Graduate School of Medicine discovered that parafibromin, a protein found in the cell’s nucleus, interacts with the transcriptional coactivators, proteins involved in transmitting genetic information, of three major morphogen signaling pathways (Wnt, Hedgehog, and Notch pathways)—either in a competitive or cooperative manner—and expresses genes appropriate to the cellular context. Thus, the researchers concluded that parafibromin is a molecule that functions much like the logic board of a computer, integrating signal inputs transmitted by distinct devices and converting them into appropriate outputs.

“Even in humans, deregulation of signaling pathways leads to a variety of diseases, including cancer and developmental disorders,” says Hatakeyema. He continues, “We hope the present work paves the way for the development of new therapeutics for such intractable diseases, as well as leading toward prevention.”

Department of Pathology, Immunology and Microbiology, Graduate School of Medicine