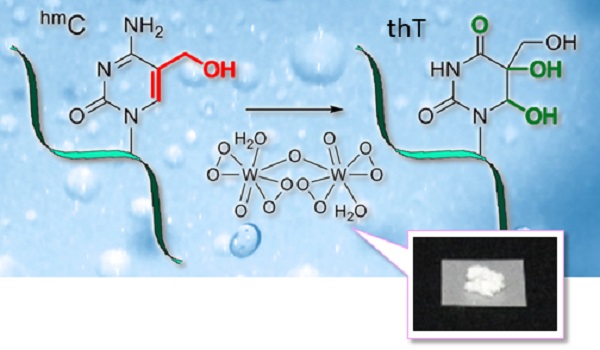 Researchers at the University of Tokyo have developed a new analytical method that uses the rare metal tungsten to measure 5-hydroxymethylcytosine (5hmC), a marker for gene expression, one nucleotide at a time. This method holds promise of contributing to advances in epigenetics and regenerative medicine research by simplifying 5hmC detection in the genome, and accelerating the pace in which knowledge on the initialization of cell functions is accumulated.

Many multicellular organisms carry out a chain of reactions that allows their genes to turn on and off by converting cytosine, a nucleotide found in DNA, into 5hmC. The substance, involved in regulating gene expression, has been found in human and mouse embryonic stem cells—cells capable of differentiating into different types of cells—and brain tissues. Several methods have so far been used to analyze 5hmC on a nucleotide scale, but each requires multiple steps to achieve the desired reaction, or involves damaging the DNA.

The research group led by Professor Akimitsu Okamoto at the Research Center for Advanced Science and Technology, and Assistant Professor Gosuke Hayashi and graduate student Kenta Koyama at the Graduate School of Engineering, at the University of Tokyo, first revealed that the tungsten-containing acid peroxotungstate reacts just with 5hmC, the only substance carrying allyl alcohol in DNA. This oxidation has the feature of converting 5hmC into the thymine derivative, which makes it easy to detect the location of 5hmC in the DNA. The scientists applied this reaction to one-step 5hmC single-nucleotide analysis, and detected new 5hmC signals from the DNA collected from the human brain.

5hmC plays important roles not only in essential biological processes such as initializing the condition of cells, but also in diseases such as cancer.

“We expect this study will help answer fundamental questions in life sciences research of not only why and when cell functions are initialized and differentiated in iPS and embryonic stem cells, but also which gene is required in abnormal cells,” says Okamoto. He continues, “We want to use this 5hmC-analyzing technology to map the entire genome of patients for the epigenetically important DNA modification in their cells.”