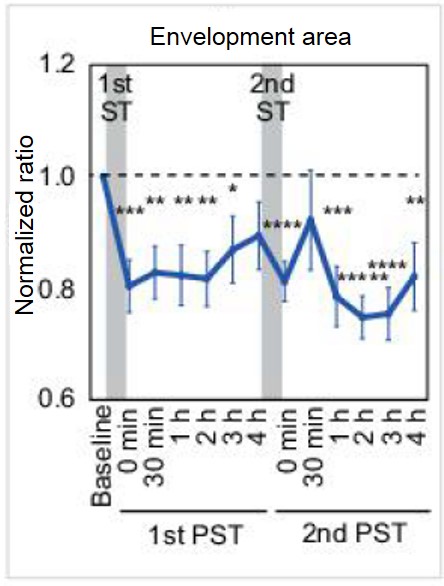 Effect of nGVS in improving body balance
Subjects who received two 30-minute nGVS with a 4-hour interval in between showed improvement in their sense of body balance. The positive effect of the stimulation can be seen by the balance parameter following stimulation, represented by the blue line, falling below the value before the electric current was applied, represented by the dotted line.
© 2017 Chisato Fujimoto.

A University of Tokyo research group has revealed that healthy elderly people who received weak electric stimulation through the ear saw their sense of balance, which tends to deteriorate with age, improve and last for several hours after discontinuing administering the electric current. The present study holds promise of becoming the cornerstone of new therapies to help patients regain their body balance function, the impairment of which has been difficult to treat until now.

The vestibular apparatus made up of structures in the inner ear enables the body to maintain a sense of equilibrium and plays a critical role in retaining balance. A decline in vestibular function causes deterioration in body balance, and existing therapies, for the most part, have not been successful in improving the condition especially for elderly patients suffering from vestibular disorders, with no effective treatment in sight.

The research group led by Assistant Professor Chisato Fujimoto, Associate Professor Shinichi Iwasaki, and Professor Tatsuya Yamasoba of the Department of Otolaryngology at the University of Tokyo Hospital has previously reported that healthy adults and patients with untreatable vestibular disorders showed improvement in their sense of balance when a weak, imperceptible electric current called noisy galvanic vestibular stimulation (nGVS), causing neither pain nor discomfort in the subjects, was administered through an electrode attached behind the ear. However, the improvement was seen only while the subjects were receiving the electric stimulation, which was applied for a relatively short period lasting just 30 seconds, and whether there were any long-term effects of nGVS on maintaining a steady balance remained unknown.

In the present study, the researchers applied 30-minute and 3-hour nGVS, respectively, to 30 healthy elderly participants, between 64 and 70 years old, and studied the stimulation’s effects on their sense of balance, and observed improved body balance lasting several hours after ceasing to apply the electric current in both cases. Furthermore, they found that a second 30-minute stimulation applied at an interval of 4-hours produced additional enhancement in body balance, as well as prolonging the period of balance improvement.

The current outcome revealed that nGVS could lead to improvement in individuals’ sense of balance that lasted several hours after ceasing the stimulation. The study showed that improved body balance can be sustained without continuous electric stimulation, and the findings may eventually find applications for the development of new treatments.

“The series of nGVS studies will be the cornerstone for development of new treatments for what has been considered an untreatable balance disorder,” says Fujimoto. He continues, “We will conduct a further clinical trial to determine the long-term effect of nGVS on balance improvement in patients with abnormalities in their vestibular apparatus. If we can prove the effect of nGVS through this trial, nGVS will be the world's first treatment supported by highly reliable scientific evidence for persistent unsteadiness caused by a severe vestibular disorder.”