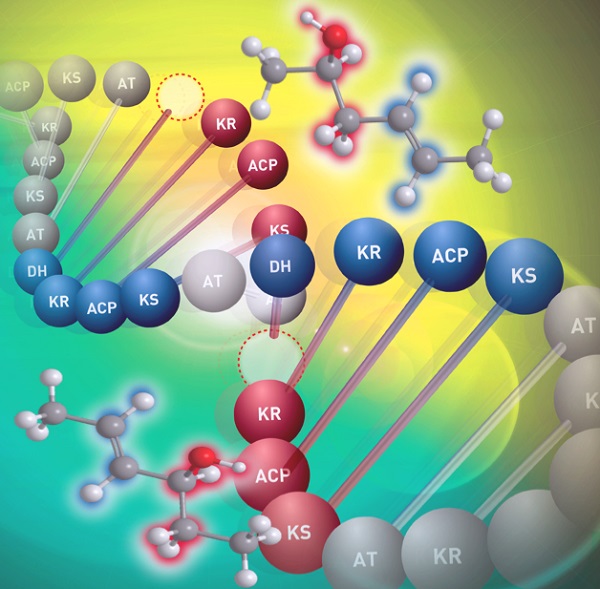 Recombination of modules in enzyme assembly line diversifies production of natural compounds
The structural diversity of polyketides is produced by concerted recombination of a given set of genes.
© 2017 Ikuro Abe.

Researchers at the University of Tokyo have revealed a genetic mechanism of how nature creates structurally diverse natural compounds. This finding opens the door for redesigning genes to produce new molecules.

Medicines are most commonly produced through organic synthesis, in which reactions in organic compounds are artificially induced; on the other hand, “synthetic biology” employing biosynthesis, which uses living organisms to induce fermentation of enzymes and microorganisms to produce valuable compounds, has been gaining traction in recent years. However, the number of ways for biosynthetically designing and producing a desired compound is still limited, and developing methods that allow free rein to design molecules remains a major challenge.

A research group led by graduate student Lihan Zhang and Professor Ikuro Abe at the University of Tokyo Graduate School of Pharmaceutical Sciences focused on the enzyme that produces the medicinally important substance polyketide, and analyzed its functions. The scientists discovered that a giant polyketide synthase, the enzyme, found in the genome of a certain bacterial host synthesizes new polyketides—with a likeness to commonly known polyketides, but different in structure—when it is expressed heterologously (that is, in a different species of bacteria). They then focused on the gene clusters that produce the polyketides, and analyzed the mechanism of how nature produces structural diversity in this class of compounds. The comparison of gene clusters revealed that the structural diversity of these polyketides is caused by gene recombination. Furthermore, some of the general recombination rules and boundaries were elucidated.

“One of the features of polyketide synthase is that their genetic architecture resembles assembly lines and thereby closely reflects the structure of the products,” says Abe. He continues, “Our results pave the way for the creation of assembly lines whose modules can be rearranged freely to produce diverse polyketide compounds.”

The present findings are the result of a collaboration with Dr. Kazuo Shin-ya, National Institute of Advanced Industrial Science and Technology; Professor Haruo Ikeda, Kitasato University; and others, supported by Grant-in-Aid for Scientific Research on Innovative Areas “Creation of Complex Functional Molecules by Rational Redesign of Biosynthetic Machineries.”