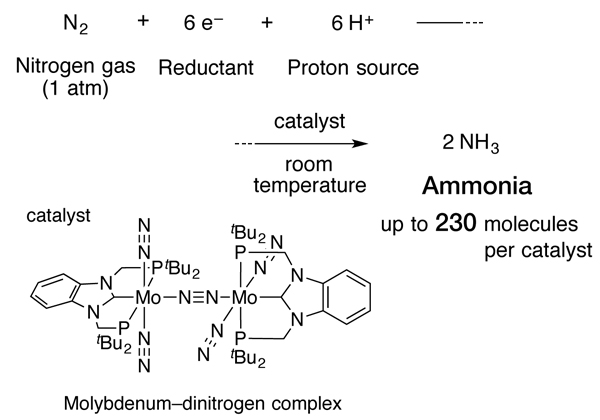 Ammonia synthesis catalyzed by new molybdenum complex
With a novel molybdenum-dinitrogen complex as the catalyst, a chemical reaction between nitrogen gas at normal atmospheric pressure, and a reductant and proton source generated as many as 230 molecules of ammonia per molecule of catalyst, at room temperature.
© 2017 Yoshiaki Nishibayashi.

A joint group of University of Tokyo researchers and their collaborators designed and synthesized a new molybdenum-dinitrogen complex, and succeeded in converting nitrogen gas directly into ammonia at room temperature and normal atmospheric pressure by using this complex as a catalyst. The catalyst recorded the highest activity ever reported for a molybdenum complex.

Nitrogen is an essential element for living things included in proteins and other biological molecules. Nitrogen atoms are abundant in the atmosphere in the form of nitrogen gas, but the gas does not readily engage in chemical reactions and cannot be used as a direct source of nitrogen. Therefore, ammonia, as a nitrogen source, is produced industrially from nitrogen gas through a method called the Haber-Bosch process. This synthetic nitrogen fixation—conversion of nitrogen gas into more reactive nitrogen compounds like ammonia—requires high temperature (400–600 degrees Celsius) and high pressure (100–200 atmospheres) to synthesize ammonia from nitrogen and hydrogen gases, consuming huge quantities of energy. Some alternatives to this process that require only mild reaction conditions have been reported, but the tendency of the catalysts to easily decompose and the consequent low activity have been a major drawback.

In the current study, the research group of Professor Yoshiaki Nishibayashi at the University of Tokyo’s Graduate School of Engineering working with the group led by Professor Kazunari Yoshizawa at Kyushu University’s Institute for Materials Chemistry and Engineering developed a new molybdenum–dinitrogen complex—in particular, the team conceived and successfully engineered a complex having a structure that binds strongly with metal atoms which does not easily decompose as a catalyst. Through a chemical reaction between nitrogen gas at normal pressure, and an electron source (reductant) and a proton source, the scientists formed ammonia at room temperature in the presence of the complex as a catalyst. As expected, this molybdenum-dinitrogen complex has a longer life and produces ammonia more rapidly than others reported so far. Moreover, one molecule of this complex could generate up to 230 molecules of ammonia, the highest catalytic activity ever.

The newly designed complex is an important achievement towards the development of energy-saving next-generation nitrogen fixation systems, which carry a lot of potential.

"Our research group including Aya Eizawa, a graduate student, produced ammonia from nitrogen gas efficiently under mild reaction conditions using a novel molybdenum-dinitrogen complex designed for high catalytic performance for ammonia synthesis," says Nishibayashi. He continues, "We were thrilled when the complex exhibited the high catalytic activity as according to design. We owe this achievement to the efforts of Ms. Eizawa and her lab partners."