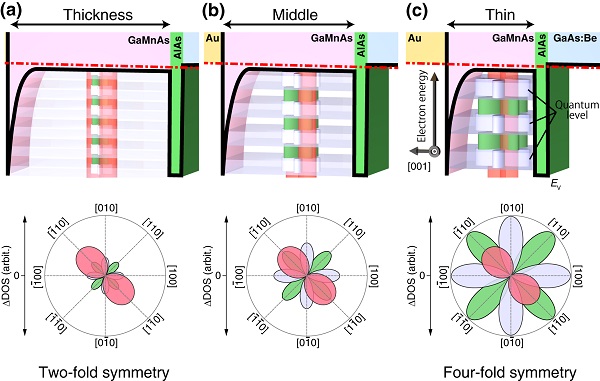 University of Tokyo researchers have proposed and successfully demonstrated a new concept for artificially controlling the preferred orientation, or easy axes, of magnetization in ferromagnetic thin films through band engineering, a method to control the energy band structure of electrons in a material.

Reduced power consumption will be a basic requirement for electronic devices in the internet of things/internet of everything (IoT/IoE) age linking people and machines over an interconnected digital network. Spintronics is a promising research field likely to provide possible solutions for lowering the power consumption of electronic devices through nonvolatile magnetization—in which the magnetization state can be maintained without power supply—of ferromagnetic materials; however, a large amount of energy is needed to reverse the magnetization, acting as an impediment in advancing its application. To resolve this problem, scientists are looking at artificially controlling the easy axes of magnetization in ferromagnetic thin films to reduce power consumption significantly.

The research group led by then-Project Researcher Iriya Muneta, Associate Professor Shinobu Ohya, and Professor Masaaki Tanaka at the Graduate School of Engineering, the University of Tokyo, used a so-called quantum well structure, a very thin ferromagnetic layer a few nanometers thick, in the current study. The thinner the quantum well, the stronger the quantum confinement of electrons and holes, carrying a positive electric charge. The group fabricated tunnel diodes having a quantum well with varying quantum size effects due to variations in film thickness, composed of GaMnAs (gallium, manganese, arsenic), a semiconductor unique in that it exhibits ferromagnetism. By varying the direction of magnetization and measuring the tunneling current, the researchers found that the symmetry of the directions of the easy magnetization axes (i.e., the symmetry of the magnetization direction dependence of the density of states) changes significantly according to changes in voltage (energy of the holes). Furthermore, they found that this phenomenon is more pronounced in thinner GaMnAs quantum wells with stronger quantum confinement.

The unique application of band engineering—developed for semiconductor devices—in this study to a ferromagnetic material may open the door to new methods for controlling magnetization, and ultimately lead to the development of low-energy electronic devices.

"By combining our method for controlling the easy axis of magnetization with the electric field effect widely used, it will become possible to control the magnetization of a ferromagnet with much lower power consumption," says Tanaka. He continues, "Controlling magnetism by band engineering is an unexplored field, so we expect further research will yield more exciting new developments."

"I found this new phenomenon by chance," says Muneta, who performed most of the experiments. He adds, "To uncover what was happening, I diligently carried out experiments and analyses for a long time, and was finally able to obtain clear conclusions. This research has derived new potential for ferromagnetic semiconductors."