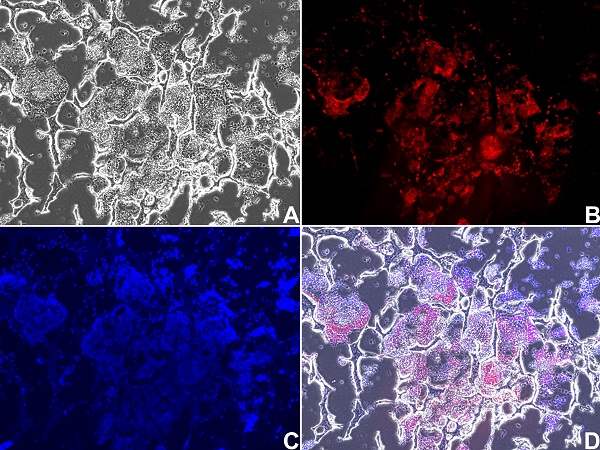 Images of 3D bone-like tissues generated from mouse embryonic stem cells
(A) Phase-contrast image of cells aggregating within pores of the scaffold; (B) expression of SP7, an osteoblast marker, shown in red; cells within pores are SP7-positive osteoblasts; (C) nuclear staining with blue; (D) overlay image of figures A, B, C
© 2017 Shinsuke Ohba.

Researchers at the University of Tokyo have developed a cell culture method that generates three-dimensional bone-like tissues from mouse pluripotent stem cells—cells which can differentiate into various tissue types and have infinite growth potential—using only small molecules, in given conditions, as inducers. The current result serves as a step toward the development of basic technologies to generate three-dimensional tissues in cell cultures and test tubes, which mimic or are patterned after our organs.

Three-dimensional tissue-like structures, called organoids, generated in cell culture and consisting of various cell types derived from pluripotent stem cells, including embryonic stem cells and induced pluripotent stem cells—cells reprogrammed to act like embryonic stem cells, which can differentiate into most cell types—would benefit not only regenerative medicine, but also contribute to our understanding of tissue formation processes and drug development. When taking safety and costs into consideration, avoiding using cell-to-cell transfer of genetic material, recombinant proteins, and serum of calf fetuses and other substances of unknown composition, which have so far been widely used in cell culture, is preferable.

In 2014, a group led by Associate Professor Shinsuke Ohba at the University of Tokyo’s Graduate School of Medicine developed a protocol that used only four small molecules as an inducer to efficiently generate bone-forming cells (osteoblasts) from pluripotent stem cells by forming a mesoderm, one of the embryo’s germ layers that develops into bone, muscle, blood vessels, and cardiovascular organs including the heart.

In the present study, Ohba, Professor Ung-il Chung (Yuichi Tei), also of the Graduate School of Medicine, and their collaborators succeeded in generating three-dimensional bone-like tissues by applying the induction protocol to a three-dimensional cell culture system using sponges composed of atelocollagen—collagen molecules lacking the capability of inducing immune response by having this property removed—to generate osteoblasts and osteocytes (mature bone cells) from mouse pluripotent stem cells. In addition, when the embryonic stem cell-derived osteoblasts and osteocytes were cultured with progenitors of osteoclasts (bone-resorbing cells) in the sponge, mature osteoclasts were formed. These results suggest that the osteoblasts and osteocytes derived from mouse embryonic stem cells are functional, as they are in living bodies, with the ability to support osteoclast formation.

"This research potentially leads to the generation of bone-like tissues in cell culture, in which three cell populations responsible for the formation and maintenance of our bones, namely osteoblasts, osteocytes, and osteoclasts, function in a three-dimensional manner," says Ohba. He continues, "We hope the strategy will contribute to our understanding of the origin and development of bone diseases, and help elucidate the mechanisms underlying the formation and maintenance of bones, as well as promote bone regenerative medicine and the development of drugs for treating bone diseases."