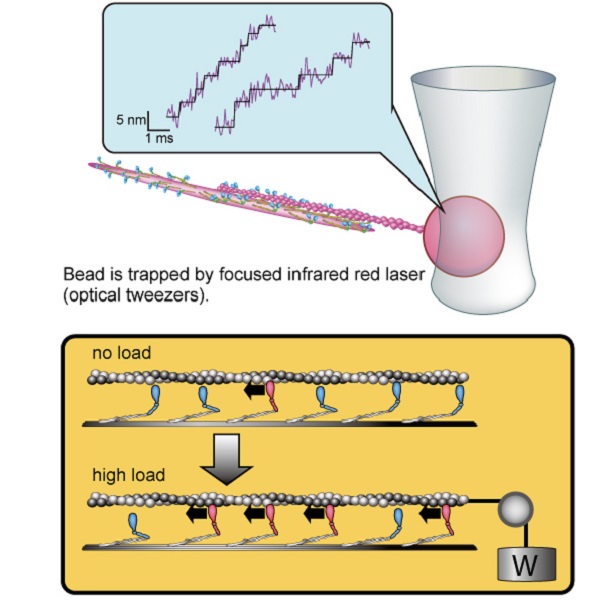 Schematic drawings illustrating force measurement of myosin filament, coordinated force generation among skeletal myosin
Forces generated by myosin filament were measured by optical tweezers (top). Approximately 5-nanometer stepwise displacements of actin filament, which occur at approximately 1-millisecond intervals, were measured at the physiologically relevant concentration of ATP for the first time (top). The analysis of these data and the simulation model revealed the molecular mechanism of coordinated force generation, where a larger number of myosin molecules generate force cooperatively by sensing an increase in load (bottom).
© 2017 Motoshi Kaya.

A University of Tokyo research group has shown that the skeletal-muscle protein myosin, clustered in a mass, works collectively to generate force in response to high loads. It also revealed the molecular mechanism for such cooperative force generation among myosin molecules, which enables efficient muscle contractions. The current findings may contribute to the development of efficient nanomachines and artificial actuators—mechanisms that convert energy into motion—in the future.

Skeletal muscles are critical for carrying out a wide range of biological functions, from moving the body, to eye movements and adjusting our vision and focus, to tongue motions involved in speech. Muscle contraction is driven by myosins, which form a myofilament, an ultramicroscopic ensemble, comprising approximately 300 molecules interacting with filaments of actin, another muscle protein.

The group led by Assistant Professor Motoshi Kaya and Professor Hideo Higuchi at the Graduate School of Science at the University of Tokyo set out to answer the question of whether specific molecular properties give rise to myosin's collective generation of force. The researchers measured the forces and movements of skeletal myosins by producing synthetic myofilaments made up of approximately 20 molecules, which interact with a single actin filament, and assessing the motion of beads 400 nanometers (1 nanometer is one-billionth of a meter) in diameter, which they placed on the actin. As a result, the team succeeded in the first-ever measurement of approximately 5 nm stepwise displacements of actin at the physiologically relevant concentration of ATP, a compound that serves as a source of energy. Thermodynamically, only the coordinated actions of multiple myosins would be able to generate the steps observed in response to higher loads. To shed light on this phenomenon, the group developed a model simulating the coupling effect of multiple myosins, and revealed the muscle proteins can increase the probability of generating collective force if each molecule remains on standby, and thus cooperates to produce force like a tug-of-war team. The study's findings propose a new principle of efficient force generation among myosin molecules, which intrinsically function randomly, but become cooperative by sensing an increase in load.

"I find it intriguing that muscles that make it possible to run at full speed or those that move the crystalline lens in the eyeball are essentially the same, sharing identical structures. In my research, I have been looking for the answer to reveal its molecular mechanism," says Kaya.

Higuchi adds, "I thought the stepwise actin displacements against such high loads were only possible if myosins somehow generated force synchronously. We were able to gain a clear understanding of the coordinated force generation among myosin motors based on our experimental data and simulation model."