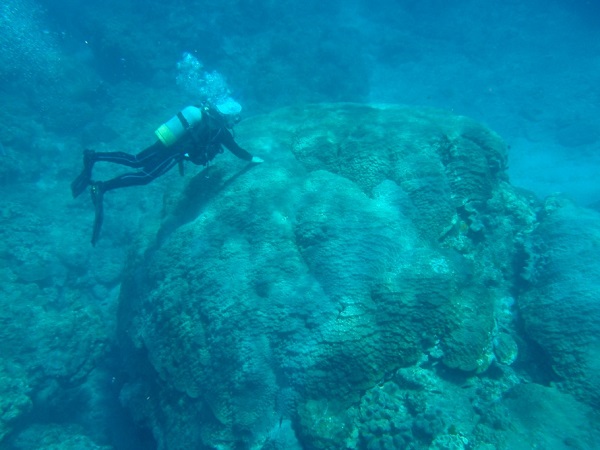 Researchers at the University of Tokyo and their collaborators have revealed that boron isotope ratios in skeletons of long-lived reef-building corals, called Porites, in the western North Pacific Ocean are experiencing a rapid decrease in recent years. The group used coral skeletons collected from Japan's Chichijima and Kikaijima islands, in the Ogasawara and Amami archipelagoes, respectively, to analyze the boron isotope ratios, which reflect the pH (acidity) of the skeletons' calcification fluid. This finding promises to provide important insights for projecting the future response of coral reef ecosystems to climate change caused by humans.

Ocean acidification is a global environmental problem caused by the absorption of carbon dioxide produced by human activity, in seawater. It blocks the building of calcium carbonate skeletons by marine organisms, such as corals, mollusks, and sea urchins, by inhibiting them from calcifying. Thus, there are growing concerns that it will affect not only coral ecosystems, but also human economic activity.

Most studies until now have evaluated the effects of ocean acidification on coral calcification by examining the response of aquarium-cultured corals to adjustments in their tank's pH, a measure of the water's acidity or alkalinity; thus, studies like the current one based on corals living in nature, led by then-graduate student Kaoru Kubota (currently JSPS Postdoctoral Fellow at the Kochi Institute for Core Sample Research, Japan Agency of Marine-Earth Science and Technology) and Professor Yusuke Yokoyama at the Atmosphere and Ocean Research Institute at the University of Tokyo, are scarce.

The results of the boron isotope measurements suggest that a decrease in seawater pH—i.e., ocean acidification—leads to a decrease in the calcification fluid's pH, which begins to negatively influence the calcification of corals. In recent years, heat-induced bleaching resulting from climate change precipitated by humans is threatening coral reefs; ocean acidification has become yet another menace the corals are facing.

"We didn't expect such beautiful reproducibility in boron isotope records of Porite coral skeletons collected from these two islands so far apart," says Kubota. He continues, "We are very excited that the high-precision measurements allowed us to detect recent subtle changes in the boron isotopes of the skeletons. However, given the impact on corals, we cannot consider it good news because the calcification fluid's decreasing pH, suggested by the boron isotope records, very likely inhibits the corals from building calcium carbonate skeletons. I think we can say that indeed ocean acidification poses an imminent threat to coral reef ecosystems."