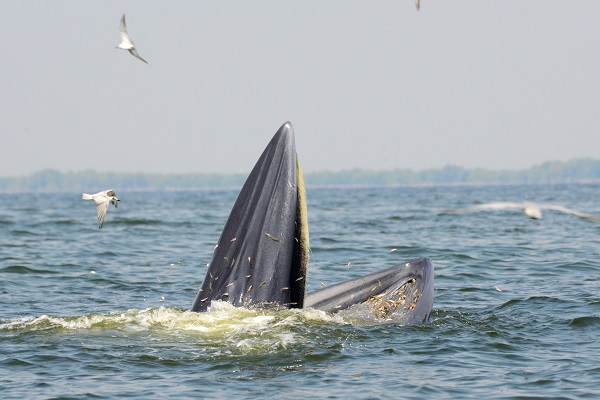 Bryde's whale during tread-water feeding
A Bryde's whale waits for small fish to flow into its mouth kept open on the sea surface while treading water.
© 2018 Takashi Iwata.

Researchers at the University of Tokyo and their collaborators discovered passive feeding behavior among a type of baleen whale called a Bryde's whale foraging in the shallow waters of the upper Gulf of Thailand in Southeast Asia. The tread-water feeding behavior reported in the study contrasts with the active method of lunge feeding, reported in many previous studies, indicating rorqual whales—a group of baleen whales of the family Balaenopteridae, which includes the Bryde's whale—modify their foraging strategy according to their environment.

The upper Gulf of Thailand is an environment depleted of oxygen, except at the sea surface, due to an excessive supply of nutrients caused by a considerable outflow of fresh water from rivers and the sewage they carry into the sea. This condition limits the habitat of the prey consisting of small fish to the water surface.

In the present study, the research group led by then-Post Graduate Researcher for Ocean Science Takashi Iwata at the Atmosphere and Ocean Research Institute at the University of Tokyo (currently JSPS overseas research fellow at the University of St. Andrews in the UK) discovered through visual observations and information gathered using data loggers attached to the animals that Bryde's whales fed on small fish at the surface by treading water and opening their mouth until the lower jaw contacted the sea surface, waiting for the prey to enter. The energy cost of this tread-water feeding, considered passive feeding behavior, is much lower than that for lunge feeding, which involves active chasing and engulfing with an open mouth at high speeds to capture a large amount of prey in deeper waters. Tread-water feeding is thus considered efficient for Bryde's whales to catch prey at the sea surface.

The researchers observed tread-water feeding in both solitary whales and adult-calf pairs—the latter behavior implying social learning. That tread-water feeding in Bryde's whales has so far been observed only in the upper Gulf of Thailand suggests this activity may be a group-typical behavior pattern particular to this region, and together with the social learning aspect, a cultural behavior only found here.

"In this study, we reported a new feeding style of Bryde's whales. We indicated that rorqual whales potentially have flexible abilities to modify their foraging behavior for various environments," says Iwata. He continues, "Bryde's whales in the Gulf of Thailand perform not only tread-water feeding but also lunge feeding. To understand their adaptation capacity, we hope to reveal how they use these foraging behaviors according to their environment."

The current research was conducted in collaboration with the National Research Institute of Fisheries Science in Japan; University of St. Andrews in the UK; and the Marine and Coastal Resources Research and Development Center, and the Phuket Marine Biological Center in Thailand.

Bio-logging Science, The University of Tokyo