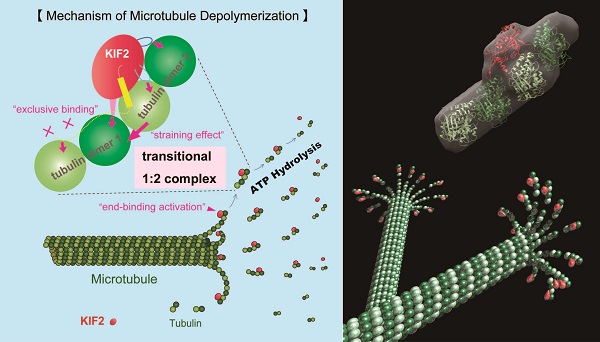 University of Tokyo researchers and their collaborators have revealed the mechanism by which microtubules, which serve as the cell's cytoskeleton, are dismantled efficiently. Microtubules are dynamic tube-like structures formed through a process called polymerization, when large numbers of a protein called tubulin bind together to form the large structure. The proper regulation of the formation (polymerization) and demolition (depolymerization) of microtubules is critical for fundamental events in cells such as the formation of neurons and cell division. KIF2, a type of motor protein called kinesin involved in intracellular transport, is known to depolymerize microtubules from tip to end; however, the mechanism by which a small number of KIF2 proteins drives the orderly dismantling of a large microtubule comprising a myriad tubulins remained unclear.

In the current study, the research group led by Project Professor Nobutaka Hirokawa and Assistant Professor Tadayuki Ogawa of the Department of Cell Biology and Anatomy at the University of Tokyo's Graduate School of Medicine teamed with Associate Professor Nobutaka Shimizu and then-Project Assistant Professor Shinya Saijo of the Institute of Materials Structure Science at the High Energy Accelerator Research Organization (KEK) in Tsukuba, Ibaraki Prefecture, to address this issue. The researchers carried out detailed analyses of the transitional states of KIF2 depolymerization of microtubules to reveal that a single KIF2 protein binds tightly to two sets of tubulin dimers—larger tubulin molecules formed through the binding of two smaller tubulin molecules—during ATP hydrolysis, the process by which adenosine triphosphate (ATP), the energy source within the body, is broken down by proteins, forming a large complex compound; this shows that one KIF2 molecule breaks down two tubulin dimers, thereby revealing that KIF2 functions as a smart molecular machine that efficiently depolymerizes two sets of tubulin dimers with one ATP.

The KIF2 protein works more efficiently to depolymerize a large amount of microtubules when dispersed in a well-balanced fashion allowing it to bind over the entire tip of the microtubule, instead of gathering in the same spot. Failure to properly regulate microtubule polymerization and depolymerization can cause many diseases, including neurodegenerative diseases and cancers. The microtubule depolymerization mechanism revealed in this study promises to become the basis for understanding the pathology to establish effective treatment methods for microtubule-related diseases.

"Researchers around the world had speculated that a single KIF2 depolymerizes only one tubulin dimer," says Hirokawa. He continues, "However, we overturned this preconception and revealed the precise mechanism in which one KIF2 molecule depolymerizes two sets of tubulin dimers. This mechanism shows us how smart the molecular motor is when working with limited resources."