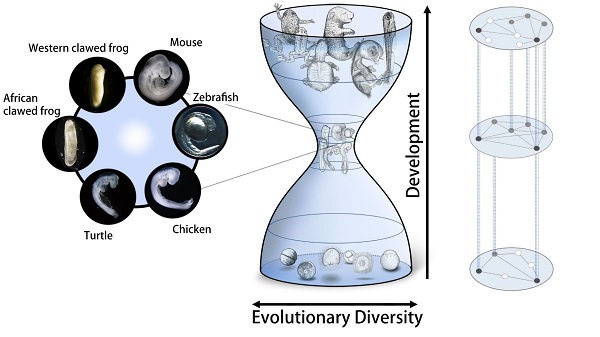 Researchers at the University of Tokyo have found that vertebrates may have conserved their basic anatomical architecture, or bodyplan, for over 500 million years by reusing their genes.

Vertebrates emerged more than 500 million years ago and diversified into a variety of species comprising a multitude of shapes, including humans and other mammals, birds, reptiles, amphibians, and fishes. However, all vertebrates have retained their basic anatomical architecture through evolution spanning several hundred million years, and scientists had not yet pinned down why this is so. Studies so far had attributed the lack of anatomical diversification to the embryonic phase when vertebrates' basic architecture develops, with recent studies highlighting the evolutionary conservation of this phase in what is called the developmental hourglass model. Nonetheless, why this embryonic phase was conserved through such a long evolutionary time scale remained unresolved.

The international collaborative group, EXPANDE consortium, led by Associate Professor Naoki Irie of the Graduate School of Science at the University of Tokyo tackled this problem by comparing the gene expression profiles during development of the embryos of eight species in a larger grouping of animals, called chordates, which comprises lancelets and tunicates, in addition to vertebrates. By identifying and comparing a massive amount of genetic data on these species, the group found that most of the genes acting around the developmental phase, which shapes the vertebrates' basic architecture, were pleiotropic genes—genes producing more than one effect—that were reused repeatedly. Notably, the researchers found a strong correlation between the ratio of such repeatedly recruited genes and evolutionary constraints. One plausible scenario is that the embryonic phase, in which the vertebrates' basic architecture develops, is enriched with repeatedly reused genes, which constrain evolutionary diversification.

Since gene recruitment is commonly observed during evolution in a variety of organisms, the study's findings promise to provide a basis for better understanding what kind of trait is likely or not so likely to evolve.

"In the beginning, I wasn't expecting to find what we discovered. In fact, I was reluctant to do the analysis that led to our main finding because I thought it would be meaningless," says Irie. He continues, "Considering our knowledge of its contribution to the evolution of many new traits, gene recruitment could be a double-edged sword in that its recurrence constrains evolution. Our findings raised a lot of additional questions in my mind for further inquiry."