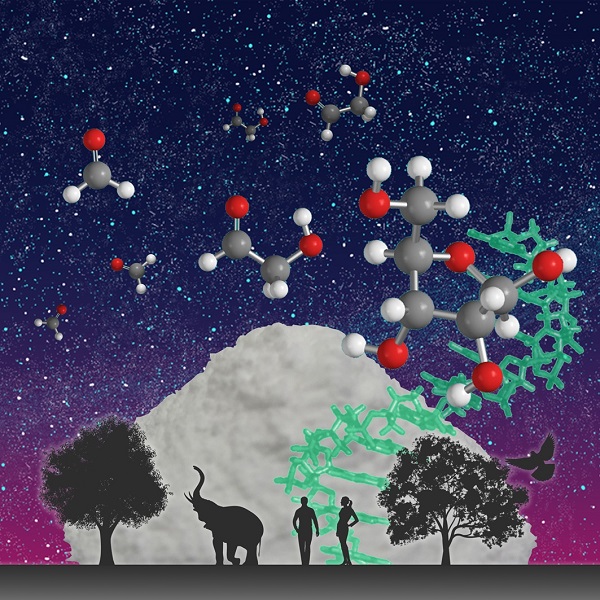 Birth of ribose
Ribose, a key component of nucleic acids, was formed from formaldehyde and glycolaldehyde, chemical compounds also known to exist in space, through a catalytic reaction with hydroxyapatite.
© 2018 Akimitsu Okamoto.

Researchers at the University of Tokyo have discovered that hydroxyapatite, a natural ore and a major mineral component of teeth and bones, catalyzes the synthesis of ribose.

Ribose is known as the main component of nucleic acids, which include DNA and RNA, the key compounds that govern life. Scientists do not yet know how the complex molecular structure of nucleic acids arose in the environment that predated the emergence of life. Researchers have attempted to create ribose, nucleotides, and other nucleic acid components from simple carbon sources in a number of experiments. Attempts at mixing carbon sources under strongly alkaline conditions or synthesis through multistep reactions have been reported in earlier studies, but several problems, including the formation of a tar product mixture or the need for highly active carbon sources, have been pointed out.

In the current study, the research team of Akimitsu Okamoto, professor at the University of Tokyo's Research Center for Advanced Science and Technology, and Kaho Usami, a graduate student in the Graduate School of Engineering, discovered that heating an aqueous solution consisting of formaldehyde and glycolaldehyde—simple carbon sources, which are also found in outer space—and hydroxyapatite powder for several days produces a mixture composed of pentose, a simple sugar containing five carbon atoms, whose principal component is ribose. Moreover, the team's analysis using nuclear magnetic resonance and mass spectrometries that examined the process leading from formaldehyde and glycolaldehyde to ribose formation indicated a sequence of cross-aldol reactions and Lobry de Bruyn–van Ekenstein transformations that repeats itself, collectively called the formose reaction—which was suggested in 1861 as a plausible ribose-forming process and proposed as a mechanism in 1959—on the surface of hydroxyapatite. Further analysis of the mechanism showed that the surface structure of hydroxyapatite is effective for the formation of pentoses, especially ribose. The reaction proceeded in a neutral-weak acidic aqueous suspension.

At present, the researchers have observed the formation of only a small amount of ribose from formaldehyde and glycolaldehyde in the presence of hydroxyapatide, but the results show that the major component of nucleic acids could be formed merely by passing an aqueous solution of carbon sources through hot phosphate deposits. The process by which ribose gives rise to a nucleoside is still unknown, but by unveiling the mechanism of the formose reaction, the creation of a proto-nucleotide mediated by this reaction may not be very far off.

"We are interested in the origin of life," says Okamoto. He continues, "We wanted to know why nucleic acids choose ribose even though there are many well-known simple sugars in nature such as glucose and galactose. So, we tried to see whether ribose could be produced using carbon sources also found in space and minerals in igneous rock deposits. Surprisingly, we found that hydroxyapatite, which contains phosphates used in nucleic acids, catalyzed ribose formation. Ribose production by hydroxyapatite may be one of the answers to the question related the origin of life on why ribose and phosphate were incorporated into nucleic acids."